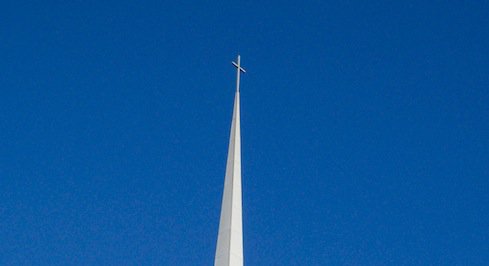 Americans are disengaging from communities, at least if the evidence proffered by scholars like Robert Putnam in Bowling Alone is to be believed. This may have a class dimension as well. Charles Murray and First Things’ own editor, R.R. Reno, suggest that community is disintegrating more rapidly, and with harsher consequences, among folks in the lower socioeconomic strata in the U.S.

Much of the literature celebrates the importance of “voluntary associations.” The Church is almost always listed as among these salutary associations. This, however, does a disservice to the Church, and that many Christians, and non-Christians, accept the moniker is actually a part of the problem. Christians on the political right often accept Putnam’s analysis uncritically, and Tocqueville’s, and others’ before him. Indeed, the Lutheran Church-Missouri Synod (my own communion) invited Putnam to speak at its largest seminary in St. Louis a few years back.

We could enter into the topic from several vantage points. My own inclination is that the Church needs to live out the fullness of her sacramental theology. The vertical dimension of baptism and the Supper are foundational: The grace that we receive from Christ by being united with him baptism and the Supper is critically important. The nature of this vertical dimension is worth arguing over.

But the almost exclusive focus of many Christians on the vertical dimension of the sacraments, however important, has led to a practical neglect of the horizontal dimension of sacramental reality: that in our union with Christ we are also united with one another. Our union with one another in the Church is as ontologically real as our union with Christ. In his “high priestly prayer” in John 17, Jesus repeatedly prays that the unity of the disciples reflect their union with him and his union with the Father. In Romans, Paul writes that “we who are many, are one body in Christ, and individually members one of another.”

It is this unity of the disciples”this communion of the saints in and with one another”and the consequential love shown for one another, that Jesus tells his disciples numerous times is the means by which the world will know that God sent him and that they are his disciples. The point of drawing this out is to underscore that the Church is not simply one among many “voluntary organizations” that brings humans together. The Church is not merely a community, it is the community. This is not to deny the reality of other communities, it only gives pride of place to the one reality that other communities reflect.

So what are some implications? First, we can ask whether the tendency to rank the Church as just one of many “voluntary associations” has an impact on the way that Christians think about the Church. If the Church is no more than a spiritual version of the Rotary Club, then it is no more than another avenue for our self-expression and self-interest. This way of understanding the Church, to draw on sociologist Ferdinand Tönnies’ phrasing, is to turn the Church from an organ of gemeinschaft (roughly translated as “organic community”) into an expression of gesellschaf (roughly translated as ”civil society). This self-understanding implicitly limits Christians’ aspiration for the Church and for their experience of it.

To be sure, we should not idealize or romanticize what our experience of Church should be on this side of the eschaton. We know from Acts and from the Epistles that conflict arose in the Church almost from the time of its first expression after Pentecost. At the same time, if we conceive of relationships in the Body of Christ as no more than associations to be used for our own personal flourishing, then we will never be able to press beyond it. (And, of course, relationships in the Body are a means to profound personal flourishing. But as is often the case, we receive the outcome only when we aim at something else.)

So, initially, our churches need to challenge us to live out the reality that Christ enacts in us through baptism and in the Supper. “By this all men will know that you are my disciples, if you have love for one another.” Expressing this type of love is often uncomfortable, at least at the beginning. But when the unchurched come into our churches, do they see much more than worldly relationships in religious garb?

Churches also need to take back some of the responsibility that they shifted onto American culture. Because of the (largely Protestant) religious public consensus in early and 19th Century America, social pressure effectively substituted for ecclesiastical discipline. We can debate whether this cultural arrangement ever worked all that well (as well as what prompted it), but whatever moral consensus ever existed has been strained by the upheavals of post-War American culture. Because of the earlier reliance on social consensus, and the consequent blurring of lines between society and Church, this cultural shift created an ecclesiastical challenge. American churches must now get into the business of distinguishing between themselves and the broader culture in ways that they didn’t in early American history.

For Christians who have been used to thinking of themselves as sitting in the mainstream of American society and culture, this can be a disturbing and disorienting shift. The upshot is that the self-identity of church communities in the U.S. must now be drawn much more sharply than it was in the past, or else they will simply evaporate with the evaporating (or evaporated) consensus. All this is to say that the Church and Christians in America can no longer free ride on the diffuse pseudo-Christianity of American culture. We must express the ontological reality that Jesus created his Church to be through baptism and the Supper: One with him, and one with one another.

James R. Rogers is associate professor of political science at Texas A&M University. His previous “On the Square” articles can be found here .