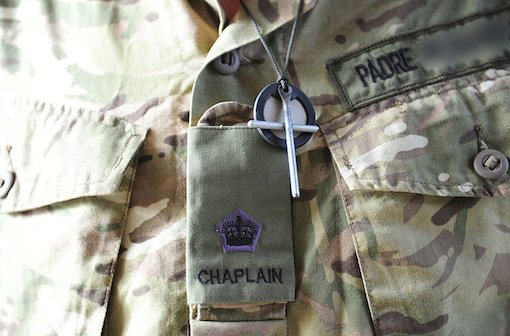 Last week I was sitting in my office at the chapel when one of our chaplain assistants came in and told me that an Airman was on his way in and wanted to talk with a chaplain. He wanted to know if I was available to see this particular Airman. I said that I was, but inquired further if the Airman expressed any denominational preference. “Did the Airman want to see a particular kind of chaplain?” The chaplain assistant assured me that the in-bound Airman didn’t have a preference; he just wanted to see a chaplain.

When he finally arrived and was escorted into my office, we were both a little surprised that we knew each other. “Oh, hi, Father,” he said. I, likewise, addressed him by his name and invited him to take a seat. This particular Airman is a practicing Catholic and attends Mass faithfully each week. We went through the counseling session and I believe I was able to help him. Furthermore, I think he was appreciative that it was I, his priest, who was the one available to meet with him. Still, the question hit me, almost immediately, “Why didn’t he ask to see the priest?” Was his request to speak with “any chaplain” an endorsement of the high quality of the chaplains we have on our staff, or in the Air Force in general, or an open-minded act of ecumenism; or was it rather a sign of the creeping religious indifferentism that affects so many people, especially in the younger generation?

We chaplains have an expression we invoke about ourselves, and it is, “We are pastor to some, chaplain to all.” So to the Catholics, I am their pastor. To all other Airmen, I am their chaplain. We are here to facilitate everyone’s First Amendment right to the free exercise of religion, whether they’re from our religious tradition or not. If we cannot perform the rite or ministry ourselves, we refer the member to one of our fellow uniformed chaplains, or to an off-base civilian minister who can.

On a personal level, the overwhelming majority of my interactions with my fellow Airmen and chaplains of other faiths has been positive. Religious particularism, and especially Christian denominationalism, is generally not a wedge issue among the American warrior class. The common mission we carry out, the shared hardships, the camaraderie that exists amongst “brothers-in-arms,” (usually) trumps religious or denominational differences. Countless Catholic military men and women have received outstanding pastoral care from Protestant chaplains of all denominations, as well as from Orthodox, Jewish, and more recently, Muslim chaplains. I know that service members of other faith groups have likewise been the beneficiaries of the best care that Catholic chaplains could provide to them. They get it. We get it. It works. But is it a false kind of ecumenism, or worse yet, a form of syncretism”proffering a new kind of state religion?

As a former instructor at the Air Force Chaplain Corps College, I know we teach the new chaplains to be the best and most faithful Southern Baptist, Evangelical Lutheran, Catholic, Jewish, or what have you, chaplain/minister they can be. Denominational endorsements and expectations are to be observed at all times. The chaplains with the best reputations among their colleagues, as well as the troops, follow that guidance faithfully. But what we, as chaplains, have found is that besides the obvious things we cannot do together, there is so much more that we can collaborate on”more than our civilian counterparts would imagine or usually do themselves.

In fact, in the recent aftermath of a workplace suicide on base, my chaplain-boss (who is an Assemblies of God minister) and I were “co-officiating” at a hastily assembled prayer service where we brought a measure of comfort to his shaken co-workers. As we did this, I was very much a Catholic priest and he was every bit an AG minister. We both prayed and ministered in our own denomination’s tradition. The people from that work center, who were a mixture of denominations, as well as no religious preference at all (“NRP,” as we say in the military) were comforted by our ministry to them”both the Catholics among them, as well as the evangelical Protestants among them. We truly were “Evangelicals and Catholics Together.” How often would a Catholic priest and an Assemblies of God minister do that in civilian life?

Furthermore, while I do share a unique fraternal bond with the other Catholic priests in the military, I would say on a personal level, my closest friends and treasured mentors have been a pretty equal mix of Catholic and non-Catholic chaplains. For example, when I returned from Iraq in 2007, my Church of God colleague and his wife were there at the airport to throw their arms around me and welcome me safely home. I’ll never forget that. Sadly, we cannot share the Eucharist together, but we share other things that are profound and good and holy.

Another favorite remembrance of mine is when, while stationed in Germany, I went on a tour of Scotland with two chaplain-buddies of mine. One was a Presbyterian minister; the other was an Episcopal priest. (Need I add that we “may” have stopped at a whisky distillery, or two . . . .) Besides the great companionship of my friends, I learned a lot about the history of the church in Scotland, and about Presbyterianism. It was one of the best vacations I’ve ever taken.

It’s clear that the number of military personnel who identify as NRP, or “None,” is growing. Perhaps the military finally needs to add the catch-all spiritual but not religious, or “SNR” category, on the dog tags. Young people come into the service today much more unsure about the value of religious identity. But I also know they love their chaplains. Sadly, due to the shortage of Catholic priests in the military, Catholic service members have been forced to seek out ministers of other ecclesial communities for solace and guidance, especially during the normal Monday to Friday work week.

That Airman who came to see “any chaplain” last week is a faithful, practicing Catholic who brings his family to church every Sunday. He’s not indifferent toward his faith. Clearly, I am “his priest.” But I’d like to think that along with many a Soldier, Sailor, Airman, and Marine, he recognizes what I do, and what the Catholic Church teaches about our brothers and sisters in Christ, namely, “Catholics must gladly acknowledge and esteem the truly Christian endowments from our common heritage which are to be found among our separated brethren. It is right and salutary to recognize the riches of Christ and virtuous works in the lives of others who are bearing witness to Christ, sometimes even to the shedding of their blood.” ( Decree on Ecumenism , 26)

Though hardly indifferent to their own religious heritage, most service members are open to, and accepting of their comrades and chaplains of different faiths. It is a learned and normative way of interacting in the U.S. armed forces. As the military is called on to do every day, we make the difficult look easy.

James A. Hamel is a Catholic priest serving on active duty in the Air Force. He is currently the Deputy Wing Chaplain at Eglin Air Force Base, Florida.

Articles by James A. Hamel