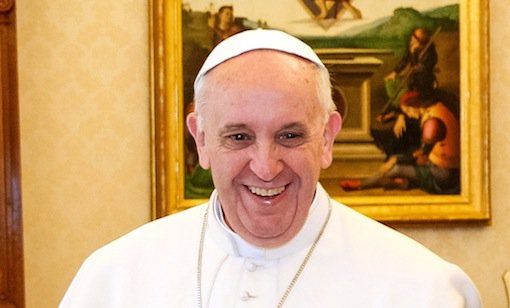 In 2005, following the death of Blessed John Paul II, I asked one of my closest friends”a Jesuit who has served the Church loyally for decades”who he thought would make a worthy successor. Stressing he would welcome anyone chosen, he remarked, “I hope it might be my Jesuit colleague in Argentina, Cardinal Bergoglio. Many of us believe he has the qualities of a saint.”

The election, as it turned out, went to Joseph Ratzinger, who left behind his own extraordinary legacy as Benedict XVI. But Cardinal Bergolio’s name stayed with me, and when he succeeded Benedict, I heard again from my Jesuit friend. He was overwhelmed with joy. “Like Benedict, he will prove a treasure to the Church. He is a man of great faith and compassion, truly humble, and completely devoted to Our Lord. Let us pray for him.”

Shortly after he was elected pontiff, my friend, Robert Moynihan wrote a beautiful book about Bergoglio’s Christian witness, Pray for Me . And what that book conveys, as I said at the time , is even more true today:

If there is one thing that distinguishes Pope Francis from other world leaders, it is his authenticity. He is not a man to be led around by bureaucrats or dubious “advisors,” much less “spinmeisters,” but instead follows his own heart. Much like his namesake, St. Francis, he is a bit of a free spirit, but it is a freedom anchored deep within the Church, and completely orthodox. Francis is innovative, independent-minded and a would-be reformer”but certainly no rebel.

Like many men of God, however, Francis has met opposition, even detraction. When John Paul II died, and Bergoglio’s name surfaced as a possible successor, his anti-Catholic opponents in Argentina spread the myth that he had collaborated with the military junta during the 1970’s as Jesuit provincial, allowing two Jesuit priests to be kidnapped and tortured. When Bergoglio actually became pope, after Benedict’s resignation, the canard returned with a vengeance . The allegations were widely repeated, but the Holy See denounced the campaign as coming from “anti-clerical, left-wing elements” used to attacking the Church. Francis was vindicated when one of two priests (the other has since died), who had supposedly been sold out, publicly defended Francis , saying that charges that he and his fellow Jesuit were betrayed by their superior are “baseless.” Moreover, a new investigative work has just appeared revealing that, far from collaborating with the military dictatorship, the future pope actually saved many of its intended victims, just as Oskar Schindler rescued Jews from the Nazis.

One would think, given this effort to defame the pontiff, that commentators would be extra-careful not to misrepresent him. Instead, however, what we have witnessed, from a strange alliance of commentators, on both the Left and Right, is an effort to depict Francis as someone he is not, and never has been.

On everything from evangelization to conscience to morality to liturgy, the Pope’s words have been interpreted in ways that make his orthodoxy almost unrecognizable.

Begin with the Pope’s recent interview with La Repubblica . Put aside that the interview was not recorded, was an after-the-fact reconstruction, and is certainly not magisterial, as the Vatican itself noted . For reaching out to a friendly atheist, Eugenio Scalfari, whom Francis encouraged to “follow the good” as he conceived it, and for assuring him that proselytism is “solemn nonsense,” the pope suddenly stood accused of sacrificing the Gospel to political correctness, falling into relativism and excusing misguided consciences.

Far from sanctioning relativism or justifying consciences darkened by sin, the Pope was simply affirming the Catholic conviction that “the natural law will assert itself,” as Brett Salkeld noted, in an insightful post at Vox Nova . “Even in times of grave depravity, when the whole culture conspires to cover up a systematic sin . . . the natural law can reveal itself through the consciences of those who honestly seek to know the truth.”

And like the apostles, Francis has consistently exhorted the faithful to preach the Gospel everywhere, and without compromise. He did so just this past May, in his Message for World Mission Day , which we will be celebrating this Sunday (October 20th). “It is necessary,” taught the Pope, “to proclaim courageously and in every situation the Gospel of Christ,” and to “take it to the ‘peripheries,’ especially to those who have not yet had the opportunity to know Christ.”

Francis also explained the difference between proposing the Gospel, and imposing it through coercive “proselytism”:

Sometimes, it is still thought that proclaiming the truth of the Gospel means an assault on freedom. Paul VI speaks eloquently on this: “It would be . . . an error to impose something on the consciences of our brethren. But to propose to their consciences the truth of the Gospel and salvation in Jesus Christ, with complete clarity and with total respect for free options which it presents . . . is a tribute to this freedom.” . . . The Church’s missionary spirit is not about proselytizing, but the testimony of a life that illuminates the path, which brings hope and love.

This is exactly the approach Francis was following in his conversation with Scalfari”not just for his benefit, but for everyone. And it is ironic, just as certain Christians were chastising Francis for allegedly watering down the Gospel, Time magazine, a very secular resource, understood what was going on :

He [Francis] may be the one being interviewed, but he is also the one guiding the conversation, especially when it comes to the core questions of belief. He proves himself to be a Socratic teacher. Scalfari asks a question, the Holy Father returns it with a question or a thought which inspires a question, Scalfari figures his way through it. The result has a profound spiritual effect, and pushes the reader to consider what it means to believe.

If the Pope’s approach toward nonbelievers was widely misunderstood, his statements on social issues have been distorted beyond recognition. As the Archbishop of Buenos Aires, Cardinal Bergolio courageously and very publicly defended the Church’s teachings on marriage and sexual morality, a stance for which he was bitterly attacked . But on his plane trip back from Brazil, five innocent words uttered by Francis”“Who am I to judge?””became a rallying cry for those looking for permission to sin, and mistakenly thought Francis had given it to them. All Francis had done, in connection with a discussion on sexual sin and confession, was urge Christians to welcome sincere penitents back with mercy”a perennial teaching of the Church.

In 2005, Cardinal Bergolio gave an extraordinary pro-life sermon , exhorting the faithful to fight abortion and the culture of death, and not relent in the face of persecution, even if “they deliver you to the courts.” Two years later, he described abortion as a ruthless “death penalty” and approved a document which instructed that Holy Communion be denied those facilitating abortions, including politicians. As Pope, he has personally joined Italy’s March for Life , implored legislators to defend the unborn, and stated every unborn child killed through abortion has the face of Jesus Christ . Yet because he has also said that Catholic opposition to abortion”and the Church’s other moral doctrines”need to be seen as flowing from the centrality of the Gospel, and not in isolation from it, a multitude of pundits declared he was somehow rebuking the American bishops. But the American bishops are doing no more than what Cardinal Bergolio did as an episcopal leader in Argentina himself, and in a recent meeting with Cardinal Dolan, Pope Francis affirmed the American bishops’ public stands .

Even as the pope’s comments about not obsessing about moral issues apart from the Gospel are highlighted, he himself continues to be assailed because he “won’t stop talking about the devil.”

Many have written that Francis’ pontificate has a different tone and accent from Benedict’s, and that their attitudes toward the liturgy are clearly distinguishable. But whatever the degree of their stylistic differences, and extent they favor the Latin Mass, both accept its legitimacy, and its attraction to numerous believers. The same cannot be said of those who unequivocally condemn it, or, conversely, try to use it as a weapon against Vatican II.

Most astonishing of all is the idea that Francis is accommodating his papacy to the ways of the world, ignoring the Gospel’s command not to conform to it. Sandro Magister wrote about Francis’s mission: “There is nothing in this program of the pontificate that could turn out to be unacceptable to the dominant secular opinion.” Yet, the day after he was elected pope, Francis declared :

And the day after Magister published his piece, Francis continued at Assisi: “A Christian cannot coexist with the spirit of the world, ” for worldliness “leads us to vanity arrogance and pride,” it “is an idol,” and “worldliness is a murderer because it kills souls, kills people, kills the Church.”

This is the spirit of cultural appeasement?

In recent days, more and more people have taken aim at Francis, saying they feel compelled to do so, to uphold the honor of the Church. It is time for those of us who admire Francis, and believe in his integrity, to vigorously defend him.