Several years ago, I received a “personal” letter from the Ku Klux Klan of Upstate South Carolina. A colleague of mine in my college’s Religion Department had asked me to conduct a model Seder for Passover for her students and had invited a reporter from the Spartanburg newspaper to cover the event. A week later, the letter arrived. I was not frightened or disturbed (unlike my poor mother in Illinois to whom I made the mistake of reading the letter. “Get out of South Carolina!” she pleaded), but I was unsettled. Never before had I been singled out as a Jew, even though the course of my life as an academic and as the unofficial “rabbi” in several congregations has often publicly and prominently featured this aspect of my identity. Now I was in the periscope of one of the oldest, most prominent national organizations promoting, among other things, Jew-hatred. It was a depressing moment, but one in which I found some seeds of hope. 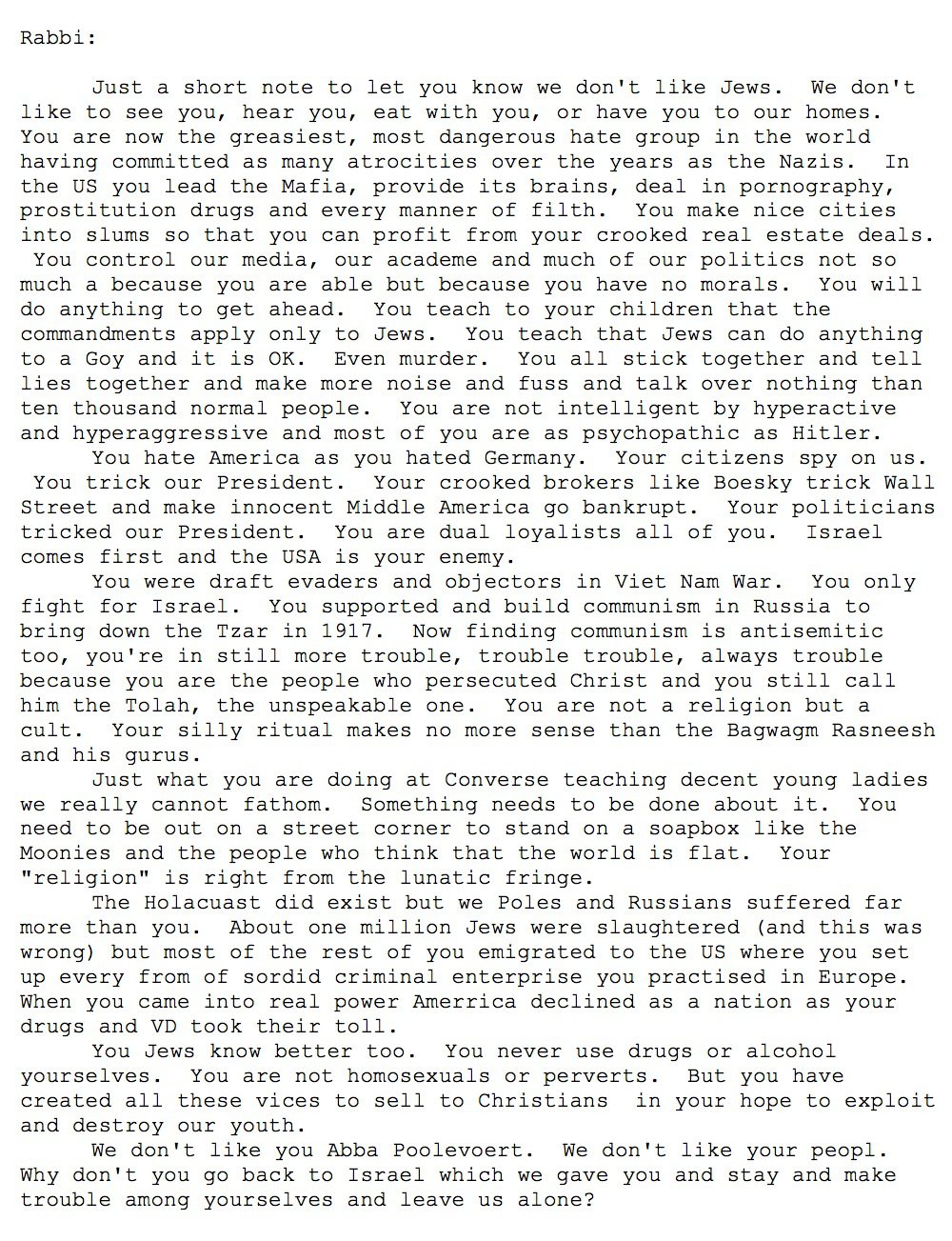 This pathetic letter”filled with obvious misspellings and misinformation”represents the impotence and irrelevance of the contemporary Ku Klux Klan. The FBI penetrated the Klan during the last several decades, gutted it as a domestic terrorist organization, and left its remnants to rot. In my many years of living in the South I have never seen a public or even semi-covert endorsement of the Klan. My students (many of whose grandfathers and great-grandfathers were undoubtedly active members) consider it so queer, distasteful, and repulsive that it has absolutely no appeal to them. But let’s retain some perspective: There was a time when the Klan controlled massive amounts of American political and social life. Lest we think of it as merely a Southern problem, let us remember that the Klan’s most numerous, powerful, and vicious branches were in Wisconsin and Indiana.

How could such a vicious and anti-American organization have come to wield such power of the minds and actions of so many Americans? As a scholar of the Constitution and the Founding, perhaps I have a tendency to view American life and history through the “high-end” dimensions of the thoughts and writing of the Framers. It is the very sobriety of the Founders that is relevant here. Madison knew that we”even we Americans”are not angels. Moreover, he never expected that the constitutional system would turn us into angels. All the Constitution can do (and has done, I would argue) is to contain and moderate as best possible the occasionally illiberal and bigoted elements of society in a framework of liberty, law, and political leadership. But they are still out there.

Despite these reflections, I still feel a “sting” born of the fact that, even though we never met, I am this man’s enemy. As a Jew and academic, there’s a bit of the Socratic expectation of “dialectical openness” on my part to any human mind who will listen, a bit of Mishnaic willingness to confront and embrace the thoughts of those with whom one disagrees. But between this man and me that can never, never happen. I only exist as his enemy”and an enemy of the human race. Now, we know from Genesis that the human condition has contained nearly from its origins a tragic suppression of the individuality of every human being through politics, religion, and almost any other aspect of our identity that contains a group element. I have had many close friends who were Christians, Muslims, Hindus, Confucians, Buddhists. We all maintained our love of our respective traditions with fervor and enthusiasm. But we often treasured those parts of our spirituality that we did not share. We could see the Divine Light in each other, which intensified our appreciation of the Presence of the One in His universe. This is, of course, an adumbration of Redemption, of that Day of Days when G-d’s grace, power, and love will reveal itself to every human being. This man and his letter remind us that we are not there yet. We must work and wait for that moment when such obscenities will evaporate from the human condition. But we must also remember that the final Redemption can only come from above and beyond.