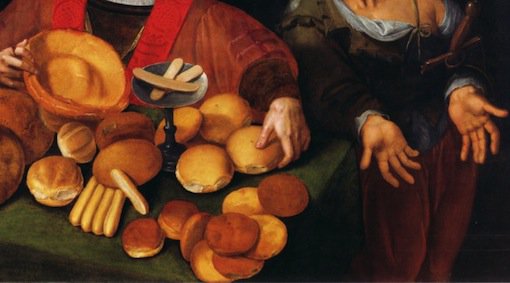 The panhandler was at the I-470 exit at Blue Ridge Boulevard when I first saw him. That’s about 101st Street on Kansas City’s Southside. He looked bad. Unkempt, he was holding a makeshift sign with a typical message, and trying to make eye contact with people who did not want to make eye contact with him. I was in no position to stop and wave the usual dollar kept on hand for such encounters.

I was headed to my bank at 87th Street for a deposit. Afterward, I headed back down Blue Ridge to the pharmacy. There was the same fellow again, but this time he had moved to Bannister (95th Street). I was surprised. Those are six long, long blocks that would have winded a New Yorker hitting the magic pace of a block a minute. He must have hidden reserves that his appearance disguised.

Pharmacy finished, I slipped on along Blue Ridge to gas up the car, wash the windshield, chat with the friendly manager and, shoot, remembered something I forgot to do at the bank, so back up to 87th. But first I stopped at the Blue Ridge grocery, where my son then worked, for some fatherly hassling. Done with that, on to the bank and”gosh”there’s that panhandler, again. In slightly more than an hour this guy had been at all three major intersections along Blue Ridge, advertising his plight with sign and bucket.

I was unusually irritated. He obviously had a car and that offended my perception of his poverty. I had not parted with a dime and yet I felt I had been deceived, made a victim of fraud and deceptive advertising.

Reflecting on the episode, though, I found it made sense, a lot of sense. Just like other career sales personnel, beggars seek the best locations to attract clients, and a car to get to them is just the cost of doing business. Poverty in America does not exclude the possibility of car ownership. For all I know, he lived in his car. I’ve known others who had to, for a time.

When I remember that Blue Ridge panhandler , I always end up thinking of Lazarus and the rich man. The story is a very disturbing parable. Jesus tells us almost nothing about either man. There is none of the information we like to have when deciding when or even whether to hand a dollar to someone.

Jesus doesn’t say, for example, if Lazarus was deserving or lazy, drug-addicted or clean, mentally ill and off his medication, or a good guy just down on his luck. Jesus doesn’t even say if he was a disabled veteran. We don’t know if Lazarus was persistently confrontational, belligerently cornering the rich man every morning, or if he just lay at the gate annoyingly mute. We’re not told anything. All we know is that he was at the gate, sick and hungry.

As for Dives (Latin for rich , the name tradition has given the rich man), we know even less. We have nothing on which to assess the judgment made against him. Did he invite his friends over to laugh and point? Did he have his biggest and toughest servant try to chase Lazarus away? Was he a cold man, heartless, habitually avoiding eye contact, or merely so inured to the sight of beggars that Lazarus never registered in his mind? Did he mutter about the neighborhood going to hell every time he stepped around Lazarus?

We know only that Dives ate sumptuously and dressed well, and that Lazarus was hungry and sick, with no one but dogs to bathe his lesions. That is all we are told of the two men and that, Jesus seems to say, is all we need to know.

Their judgment at death is predictably unnerving: Lazarus to the lap of Father Abraham to be indulged like a child; Dives to hell.

Is there nothing else we can know about the two men, nothing about them to account for the parable’s outcome? As it turns out, yes. Dives was insensible to the gestures of supplication common to both wealth and poverty. Says Marc Barnes:

Surely we recognize that the universal postures of prayer are identical with those of the homeless man who begs by the gas station? Kneeling, pleading with fingers interwoven, imploring with hands folded, bowing, weeping, rocking, extending open palms”this is the dialect of the poor and the faithful, the common ground between the wealthy churchgoer and the beggar outside the door. Both are engaged in radical honesty about the nature of their existence . . . . If humans are fundamentally poor, then these religious acts are fundamentally human. This is the dialect of the divine liturgy, a practice in poverty, a gift to the rich man who would be ashamed to kneel on the street, the culmination of which is a soup-kitchen called Holy Communion, where we act out that universal symbol of dependency”receiving food from another.

I would like to say my Lazarus got a dollar, but he didn’t. Not mine, anyway. By the time I reasoned it through, got my car around to his side of the street, he had left. I hope he had enough gas.