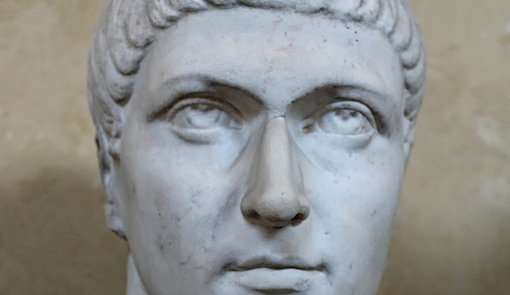 In academia, Constantine is suddenly hot. Several major new biographies have appeared, joined by new editions of older volumes and a spate of monographs on aspects of Constantine’s empire and its aftermath. Academic conferences on Constantine have become a cottage industry.

This boomlet is largely commemorative. 2012 was the 1700th anniversary of the crucial Battle of Milvian Bridge, where Constantine defeated Maxentius in what Eusebius described as a replay of Moses’ watery victory over Pharaoh. 2013 celebrates the promulgation of the Edict of Milan. Whatever the precise legal status and immediate effects of the Edict, both topics of acrimonious debate among specialists, it retains an epochal status as the first Roman decree to guarantee “libertas” in religion. It’s one of a handful of documents that made Western civilization.

“Liberty” isn’t typically paired with “Constantine” in word-association games, but it was the theme of Pope Pius X a century ago when he declared a nine-month jubilee to commemorate the “great and happy event through which, sixteen centuries ago, Peace was finally given to the Church.” Constantine defeated Maxentius “under the glorious Standard of the Cross,” and by the Edict of Milan he gave the saints “the liberty bought at the price of the blood of the Divine Redeemer and His Martyrs.”

In an address delivered in Rome in February 1913, Pius declared that the ecclesial freedom Constantine acknowledged is inherent in the Church’s being. She “is a kingdom, which has no other Lord but God Himself” and a “very lofty mission which surpasses all limits and makes of all peoples of every tongue and nations one great family.” Given the superiority of the Church’s being and mission, “it cannot even be supposed that the kingdom of the soul is subject to that of the body; that eternity becomes an instrument of time, that God Himself becomes a slave to Man.”

All this was a windup for a sharp papal rebuke: Sixteen hundred years on, the Church still has to reclaim its freedom “even from Christian governments.” As the sanctuary of God, the Church is inviolable, and Pius sternly warned that no one should defile the sanctuary and asserted that the Church “has the duty to rise up against those who claim to invade Her ground with arbitrary interference or unjust encroachments.” She cannot “give in an inch to the demands of her enemies,” because to do so would be to disobey her Lord and “fall into apostasy.”

Pius wasn’t dealing in hypotheticals. Given his testy international relations with Italy, France, and Russia, it’s not difficult to identify his targets, and he used Constantine’s anniversary to exhort Christian rulers to finish what the first Christian king began. As late as the sexdecentennial, Constantine was still a symbol potent enough to have a role in ongoing political struggles.

At the septendecentennial, not so much. Constantine has nothing like the political heft he had only a century ago. I can’t see Francis invoking Constantine when advising Merkel, Obama, or Putin. During the past nine months, there have been more media references to DC Comics’ John Constantine than to the Emperor. Most news articles about Constantine have tracked the comings and goings of his head, now safely back in York after a year on display in Italy.

That’s a boon for Constantine scholarship. Freed from the need to defend or demonize, scholars can assume that Constantine was a Christian and get down to the business of sifting sources, analyzing his achievements, and tracing the accompanying changes in the Church. Politically moribund, Constantine can be pinned like a butterfly and formulated. The result is a more dispassionate, detailed, and accurate picture of Constantine than we’ve had for centuries.

From the fourth century to the twenty-first, the line between pro- and anti-Constantinians has been one of the fissures running through Western political and cultural history. From the beginning, he polarized. Pagans like Julian hated him for undermining the empire; Christians like Eusebius celebrated him for his pious devotion to the true God. He liberated the Church from persecutors, but over time became a symbol of the Church’s enslavement to empire. Millions honor him for saving orthodoxy at the Council of Nicaea, while others complain that he imprisoned the gospel in a Hellenic creed. Critics of the papacy attacked Constantine because they believed he had granted imperial powers to the Pope.

Constantine has loomed like a colossus, a touchstone for all that was right, and wrong, about the West. “What do you think of Europe?” could be translated as “What do you think of Constantine?” Will a politically defanged Constantine entirely disappear into the graduate seminars? That seems unlikely, and it would certainly be unfortunate. Constantine, especially the “new Constantine” of recent scholarship, still has much to teach us about Christianity and politics.

Peter J. Leithart is on the pastoral staff of Trinity Reformed Church in Moscow, Idaho, and senior fellow of theology and literature at New St. Andrews College , Moscow, Idaho. His most recent book is Between Babel and Beast: America and Empires in Biblical Perspective . His previous “On the Square” articles can be found here . Image via Wikimedia Commons.