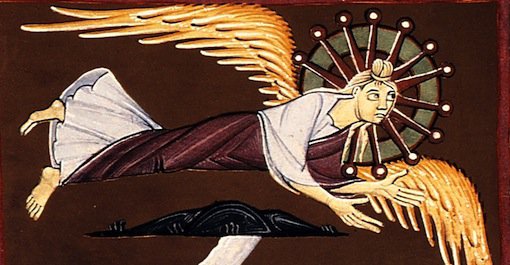 A few weeks ago at the Huffington Post , Bruce Chilton of Bard College traced the rise of American Premillennialism, the view that Jesus will return to reign on earth for a thousand years. Chilton concluded that “readings of the Apocalypse that predict millennial catastrophe” produced a “counter-reaction” from secularists and mainline Christians who ignore the Revelation of John entirely.

Both Premillennial and mainline Christians fail to grasp the obvious—that Revelation is a book of the Bible. As a result, the exotic Apocalypse seems even more exotic than it is.

Before John has finished introducing himself, he has quoted from Daniel 7 (“coming on the clouds”). When Jesus first appears, he is “like the Son of Man” with hair like white snow, more references to Daniel 7. Jesus walks among lampstands, like a priest in the temple, and he tells John, “I am the first and the last,” quoting Yahweh’s self-identification from Isaiah.

In the messages to the churches of Asia, Jesus promises the tree of life in the Paradise of God (Genesis 2) and warns against teachers who are like Balaam and Balak (Numbers) and a prophetess that he calls Jezebel (2 Kings). The lurid visions later on use the palette of Old Testament prophecy: a sealed book (Daniel again), a dragon (Isaiah), a beast from the sea (Daniel yet again), locusts (Egyptian plagues), trumpets (Jericho), vials of blood (the day of atonement), a desolated city (like Sodom, Nineveh, Babylon, Tyre, Jerusalem), and a new Zion adorned like a bride (Isaiah especially).

Revelation is often read as if, when we turn the page from Jude, we’re no longer reading about early Christian communities in a Greco-Roman world, but about the end of the first millennium AD, or the Black Death, or the turmoils of the Reformation era, or the Cold War, or the War on Terror and Jewish-Muslin tensions in today’s Middle East. So it’s again important to state the obvious: Revelation is a book of the New Testament.

There’s dispute about the date of Revelation, ranging from the mid to the late first century. There’s no dispute that it’s an early Christian text, and as such it must have been written to address the anxieties of first-century disciples. Like Paul’s letters, Revelation exhorts the faithful to persevere, calls the wayward to repentance, warns the churches about dangers within and outside, and alerts them to the intensified persecution that’s just over the horizon. John’s frightening visions shouldn’t obscure his pastoral intent to encourage his readers to witness to the word of God and the testimony of Jesus in the face of mounting opposition.

We can put the authorship question to the side and note that the gospel and the Apocalypse overlap in many ways. Only John and Revelation identify Jesus as the “Word of God” (John 1:1; Revelation 19:13) and as the “Lamb.” Only John and Revelation describe how God “tabernacles” among His people (John 1:14; Revelation 21:3). The phrase “Son of Man” occurs frequently in the other gospels, but in John it is uniquely associated with Jesus’ exaltation, as it is in Revelation 1. In both, suffering is the path to victory. According to John, Jesus is exalted on the cross, and at the end of Revelation beheaded martyrs sit on thrones.

Together, the two books form a continuous narrative. John the Baptist identifies Jesus as the Bridegroom, and Jesus’ first sign is, fittingly, to provide good, abundant wine at a wedding feast. Throughout John’s gospel, Jesus meets women who are figures of the bride—the Samaritan woman at the well, the woman caught in adultery, Mary Magdalene in the garden—but the bridegroom-bride theme is never consummated in John. There’s no marriage supper until the end of Revelation when new Jerusalem descends from heaven like a bride, ready to meet her husband. Without Revelation, the fourth gospel is an unfinished romance, the story of a (jilted?) bridegroom left waiting at the altar for his bride.

Familiarizing Revelation doesn’t unravel all the knots, of course. Puzzles still appear on every page: Who are the Nicolaitans, or the two witnesses? Whose are the heads on the beast from the sea? What does 666 mean? For some Christians, the book is more offensive than puzzling: How did the gentle sacrificial Lamb of the gospel turn into the wrathful Lamb of Revelation?

Yet reading Revelation as a book of the Bible lets us know what game we’re playing. It will keep us from thinking that Revelation is mainly about our times. And familiarizing Revelation may open its message to those many Christians who know it only in small, sterilized snippets from their lectionaries.

Peter J. Leithart is president of Trinity House . He is the author most recently of Gratitude: An Intellectual History , forthcoming from Baylor University Press. His previous “On the Square” articles can be found here .