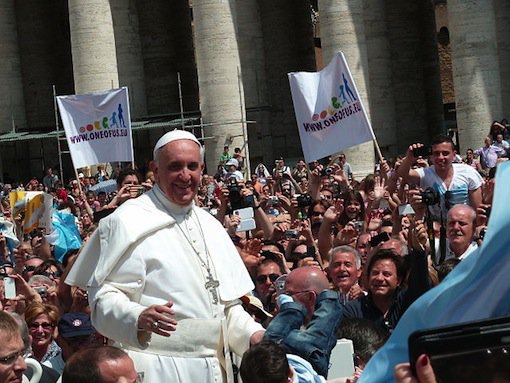 With only 266 popes named over two thousand years, the papacy is the most exclusive office on the planet, and—the occasional scoundrel notwithstanding—we Catholics have been mostly well served by our Petrine successors. Particularly during the modern era, in which invention and industry have cooperated in finding new and creative ways to spill unprecedented amounts of human blood, and ancient evils like slavery are put down in one place only to grow like intentional, pernicious viruses somewhere else, our popes have been particularly clear-eyed servants of the servants.

Perhaps perspective has something to do with that. In his book Catholicism: A Journey to the Heart of the Faith , Fr. Robert Barron recalls a comment made by Chicago’s Cardinal Francis George, who had been asked what he was thinking as he stood on the balcony of St. Peter’s after the election of Benedict XVI. George said, “I was gazing over toward the Circus Maximus, toward the Palatine Hill where the Roman Emperors once resided and reigned and looked down upon the persecution of Christians, and I thought, ‘Where are their successors? . . . But if you want to see the successor of Peter, he is right next to me, smiling and waving at the crowds.’”

From the Chair of Peter, a pope’s perspective necessarily lengthens, as with the opening of a spyglass; it is informed by thousands of years of human history that have played out before his window. Whatever else the new pope brings to this office, that fuller perspective seems to endow a man with an expansive generosity of spirit.

Currently the Internet is abuzz with the news that Pope Francis, upon hearing that Catholic Traditionalist Mario Palmaro was ill, picked up the phone and called this vociferous critic of his papacy, assuring him that there were no grudges being held, only prayers being offered.

I was astonished, amazed, above all moved [by] one of the most beautiful experiences in my life. But I felt the duty to remind the Pope that I . . . had expressed specific criticisms regarding his work, while I renewed my total fidelity [to him] as a son of the Church. The Pope almost did not let me finish the sentence, saying that he had understood that those criticisms had been made with love, and how important it had been for him to receive them.

Palmaro, noting that the conversation was private, shared it reluctantly upon consideration “that [news] agencies have mentioned it . . . ”

This is a very beautiful story that needed sharing; Western society is increasingly closing in upon itself, and we need this Petrine example of generosity and personal outreach.

Still, and sadly, our human hearts—disordered since Adam and strangled by the thorny vines of our own egocentrism—often do not develop the breadth of perspective or magnanimity enjoyed by Peter. We are inclined toward idol-worship that ultimately validates ourselves, and this inclination informs how we perceive others. This was evident as Palmaro’s story spread through social media, and one righteous wag after another responded with a variation of “this never happened with John Paul II and Benedict XVI!”

Well, nonsense. If news agencies did not “mention it” when Francis’ predecessors reached out to critics, how pinched does one’s own heart need to be to assume that such outreach never happened? Pope Benedict had his own boisterous critic in Hans Küng, whom he invited to Castel Gandolfo for a lengthy talk and supper. John Paul II, of course, went to the prison cell of his would-be assassin. The press duly covered these large gestures, but how many smaller ones did we never hear of?

Veteran Vatican journalist John Allen, currently promoting his book The Global War on Christians , shared some thoughts on the difference in papal coverage under Francis:

I was there two days after Benedict was elected, when he went back to his apartment, packed his own bag and carried it . . . to the Apostolic Palace . . . . So this notion that the humility of a pope was somehow born with Francis is a little exaggerated, [and] I frankly think there’s some media guilt here. There is a residual understanding that we spent the last eight years beating up on the pope, and so, now that we’ve got a guy we can like, we really, really like him.

We should like him; Francis is not only a School of Love on legs, he appears to be a rare man-in-full, and the only grown-up currently striding upon the world stage. We need him. The Holy Spirit clearly knew we needed him, as we needed his predecessors who—together with Francis—have become full-fledged Internet memes; through the papal trinity of John Paul II, Benedict XVI, and Francis, we image a manifestation of that which remains: hope, faith and love, respectively. None exist without the others.

It is a very fine thing to admire Pope Francis, but we’re meant to do more; we’re meant to surrender the idols of our own bitterness and absorb his lessons in generosity. Only then can we model ourselves after them.

Elizabeth Scalia is the author of Strange Gods: Unmasking the Idols of Everyday Life and the managing editor of the Catholic Portal at Patheos.com, where she blogs as The Anchoress . Her previous “On the Square” articles can be found here . Image from Wikimedia Commons .