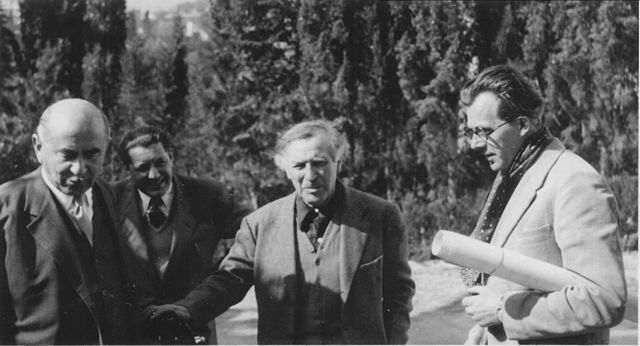 What are a series of paintings featuring the crucifixion doing on show at New York’s Jewish Museum? After all—as the museum’s senior curator acknowledges—some constituents may find such a display rather transgressive.

Yet, the answer is that these paintings are by a Jewish artist, and perhaps one of the most remarkably Jewish artists at that, Marc Chagall. Famed for his iconic pictures of Jewish fiddlers—some indeed atop roofs—the Jewish Museum’s current exhibition features many of Chagall’s lesser-known works dating from the World War II era. Of the thirty-one Chagall paintings on display in the Jewish Museum, twenty feature Jesus. What, then, are we to make of Chagall’s interest in Christian imagery?

To a certain extent, the interest can be understood as cultural. Chagall was clearly greatly influenced by the Eastern Orthodox iconography of the Tsarist Russia he grew up in, and many of his “Christian” paintings are distinctly Russian in tone. In his 1939 painting The Dream , which shows an angel appearing before a newlywed couple, Chagall employ the traditional imagery of the annunciation in an undeniably Russian setting. Similarly, in Chagall’s 1943 version of The Flight into Egypt , the family is shown fleeing by night through a snowy Russian village. More generally, many of the artist’s depictions of his hometown, Vitebsk, feature the city’s famed churches on the skyline.

It should also be recalled that Chagall spent much of his life fleeing secular totalitarianism, going first to Paris to avoid the Bolsheviks in Russia, then to New York to escape the Nazis. It is noteworthy, then, that Chagall’s paintings would use such loudly religious imagery, an act which might even be understood as a form of protest.

Those facts alone, however, don’t entirely explain his use of Christian imagery in general, or of his use of the crucifixion in particular, which he returned to over and over in his work. More important, it seems, is the way Chagall uses the crucifixion as a symbol for not just human, but specifically Jewish , suffering.

For Chagall places the crucifixion amidst contemporary scenes of anti-Jewish persecution. Jesus is unmistakably Jewish: a Jewish prayer shawl in place of the more typical loincloth, the addition of phylacteries to the arm of the figure upon the cross. In one, Apocalypse in Lilac, Capriccio , it is even a tailed and swastika-wearing Nazi, rather than a Roman soldier, that we see carrying out the crucifixion. Chagall even included the crucifixion in paintings of the tin-pot ships that carried holocaust survivors to the holy land, sometimes sinking while attempting to avoid the British blockade.

How are we to understand these paintings as Jewish? From paintings such as Exodus , begun in 1952, in which a huge crucifixion image of a distinctly Christian Jesus, haloed and illuminated, towers over the fleeing and sorrowful Jewish masses and their burning shtetl, it’s tempting to reference the theology of St. Augustine. After all, the appearance of the crucifixion alongside so many instances of Jewish suffering might well conjure thoughts of exiled Israel as blighted witness.

Yet, it seems that for Chagall, images of the crucified and noticeably Jewish Jesus were a very immediate way of evoking the inhumanity of anti-Semitism. In his particularly mournful 1944 picture The Crucified a number of Jewish men are shown on crosses throughout a devastated shtetl, the men with placards around their necks, evocative of his 1938 painting White Crucifixion in which one figure wears a placard reading ICH BIN JUDE —I am a Jew.

Chagall also used crucifixion imagery to express personal grief and his own pain at the death of his wife Bella who died suddenly in 1944. Indeed, just as Edvard Munch had painted himself as crucified, so too Chagall did likewise and in his own version of Descent from the Cross we observe the letters “MARC CH” hung upon the crucifix.

Not surprisingly, Chagall wrestled with the appropriateness of using Christian imagery in this way, not least because of the relationship that accusations surrounding the murder of Jesus have had for the incitement of Jew-hatred. From his own writings, however, we can see how Chagall understood his use of this imagery as important for not simply conveying a specifically Jewish sadness, which he clearly felt it did, but also for speaking to all mankind: It was his way of universalizing his message about the suffering of his own community.

The way in which these paintings very consciously put into conversation traditional Christian and Jewish imagery is not only deeply moving, but also demonstrates that the notion of a Judeo-Christian culture is no interfaith myth. Chagall’s work on this subject speaks powerfully of both the possibility, and indeed reality, of a cohesive civilization in which Jews and Christians share certain religious motifs.

Chagall’s war year paintings bring together the Jewish and Christian worlds in a way that manifests profoundly the beauty of a shared heritage, one that remains a valuable resource for all of us. Despite just how much agony is brought to bear in many of these paintings, there is still a certain joy to be found in what they have to tell us about our longstanding common Judeo-Christian culture.

Tom Wilson is a British born writer and political analyst. He is currently a fellow at the Tikvah Fund in New York. The Jewish Museum’s exhibit, titled Chagall: Love, War, and Exile , will be available to view until February 2, 2014. Image of Chagall via Wikimedia Commons .