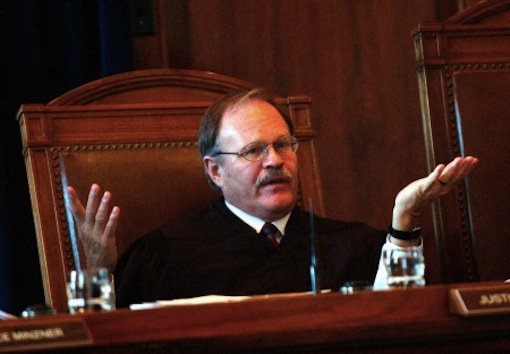 The New Mexico Supreme Court unanimously ruled that a Christian-owned photography business couldn’t refuse to photograph a homosexual wedding. In his concurring statement, Justice Richard Bosson gives a new twist to Mill’s classic liberal distinction of between what is “private” and “public” based on harm, and instead distinguishes between what one may believe in one’s “private” life and what one must do in the market. In the “smaller, more focused world of the marketplace,” he writes, merchants must “compromise” with those who believe other than they do. “That sense of respect we owe others”—a sense which compels us to compromise our deepest held beliefs so that others can purchase what they desire—“illuminates this country, setting it apart from the discord that afflicts much of the rest of the world.” In other words, what sets America apart is our willingness, and now our necessity, to prostitute our religious beliefs for the sake of the market.

The Court justified its ruling by appealing to the New Mexico Human Rights Act: As a human right, one cannot be discriminated against or refused goods and services on the basis of morally irrelevant features like “race, religion, color, national origin, ancestry, sex, sexual orientation, gender identity, spousal affiliation or physical or mental handicap.” Thus the “Huguenins [the photographers] today can no more turn away customers on the basis of sexual orientation—photographing a same-sex marriage ceremony—than they could refuse to photograph African-Americans or Muslims.”

Others have already begun to evaluate the Court’s reasoning in the case (e.g., its failure to be persuaded by the photographers’ argument that they objected to photographing an event , and not homosexuals tout court ) and its implications for religious freedom. Yet how did Bosson and the other justices conclude that homosexuals have a right to be photographed in the first place?

The answer, I believe, lies in our unreflective use of the language of natural rights while having jettisoned the philosophical grounds for such rights. The traditional and limited Christian duty to secure the welfare of others regardless of their natural “accidents” has become an open-ended duty to secure the satisfaction of others’ desires, regardless of one’s own religious and moral beliefs, even when the desires one is being asked to satisfy are immoral.

Christians and natural lawyers have long held that it would sometimes be wrong for merchants to refuse some goods and services on the basis of morally irrelevant “accidents” of nature, such as race. The classic argument for this conclusion has three stages.

First, in a consumer society, we must trade for what we do not ourselves produce; everyone is a merchant, as economist Adam Smith said. Not many of us grow our own food or make our own clothes or houses, and so we must trade what goods and skills we have for those we need from others. If we were unable to purchase what is necessary to flourish in a way befitting us as human beings, our welfare would be severely compromised, or worse.

Second, we not only have a natural desire to survive, but an obligation to do so. To use the language of Christian Aristotelianism, life is for something, the summum bonum . Christians believe that human beings exist to know, love, and serve a God who has loved them into existence for their own sake. We possess our lives as gifts, and therefore have an obligation to preserve them, give thanks for them, and to use them well.

However, we cannot do this if we cannot access the “basic human goods” necessary for a flourishing life. Since one cannot have an obligation to do what one cannot do, we must therefore have a right, a “moral power” to seek those goods, lest the moral law be inherently contradictory. Rights protect obligations, and our fundamental obligations–to live, to love, to learn, to seek virtue and salvation–flow from our nature as ensouled beings destined for God.

It was for this reason St. Thomas Aquinas argued that a pauper in extreme need might take the bread of a baker (and gain a debt to repay it when he was able): The pauper’s need to preserve his life gave him a right to the goods necessary to satisfy that need (cf. Summa Theologica 2-2.66.7c). Furthermore, it would be unjust for the baker to refuse to provide the pauper with what was necessary for a life fit for him, other things being equal. Private property, argued Aquinas, exists to steward God’s creation to the benefit of all. Such arguments furnished a philosophical basis for the Christian obligation of almsgiving.

Returning to our own century, we find the Court arguing that homosexual couples have a right to the someone’s camera in the same way the pauper has a right to the baker’s bread. The glaringly obvious difference between the cases is that the pauper needs the bread to survive and is obligated to pursue legitimate means of survival, whereas homosexuals desire but don’t need that someone photograph their wedding (it is possible to get married without a camera). Why didn’t the Court see this difference between bread and photographs as a morally relevant difference in what could legitimately be claimed from a merchant as one’s right?

Philosophers and economists, such as Robert and Edward Skidelsky in their recent book How Much is Enough? , have argued that the loss of the teleological view of man has led to the evisceration of classical economic distinctions between needs and wants, necessities and luxuries. All such distinctions presuppose that some ways of living are intrinsically fitting for human beings, and that the purpose of economics is to supply us with what is needed for such a life.

The rejection of the natural directionality (the teleological “intentionality”) of desire is one of the hallmarks of modern economics. Economists are as neutral towards desires as the Rawlsian state is to conceptions of the good life. As J.K. Galbraith wrote in The Affluent Society , “Nothing in economics so quickly marks an individual as incompetently trained as a disposition to remark on the legitimacy of the desire for more food and the frivolity of the desire for a more elaborate car.” Differences in desire are marked by the elasticity of prices, and nothing else.

Without a teleological vision of the human person and its attendant distinctions between needs and wants, necessities and luxuries, there is no morally principled way to distinguish between one person’s desire to have an immoral wedding photographed and another’s need to eat. The Court’s decision combines the traditional Christian belief that merchants in a commercial society should not unjustly deprive someone of some goods and services with a rejection of the idea that human life is for something, a rejection popularized by positivist economics and Rawlsian liberalism.

The Court’s decision is a perfect example of Alasdair MacIntyre’s “disquieting suggestion” in After Virtue that modern moral discourse consists of “fragments of a conceptual scheme, parts which now lack those contexts from which their significance derived,” and no one is the wiser. Put otherwise, the Court’s verdict reads like it was written with a thesaurus but no dictionary.

The upshot of the Court’s argument, Justice Bosson concludes, is that the State can enforce “tolerance” and the violation of one’s religious beliefs as the “price of citizenship.” Bosson has only shown yet again that liberal tolerance requires complicity, whereas Christian tolerance only ever required forbearance. The peace he seeks is the peace of tyranny, and not the peace of love or justice.

Joshua Schulz is assistant professor of philosophy at DeSales University.