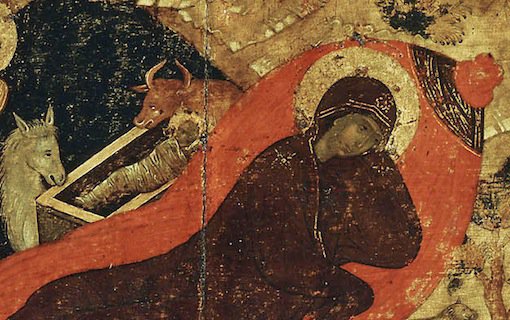 It is that season of the year when the Blessed Virgin Mary takes center stage—at least for a brief while—among almost all Christians everywhere. She does this because she has to. No Mary, no Christmas. No Christmas, no Christ. No Christ, no Christianity. Even John Calvin, the chief pioneer of Reformed Protestantism, recognized this. “We cannot enjoy the blessing brought to us in Christ,” he wrote, “without thinking at the same time of that which God gave as adornment and honor to Mary, in willing her to be the mother of his only begotten Son.”

In the later Middle Ages, certain theologians (with time on their hands, one thinks) debated whether God, by virtue of his sheer absolute power, could have become incarnate in a donkey rather than in a human person— asinus Christology. Others, pursuing this logic further, wondered whether, de potentia absoluta, God might have become invegetate in a carrot or even encalcified in a piece of granite. The problem with this approach, among others, is that donkeys and rocks do not weep at the graveside of their friends and carrots are not crucified.

The saner sort of theologians did not go there. They were concerned with the historical, not the hypothetical—not with what God could or might have done in an alternative universe but with what in fact he had once and for all done in sending his eternal Son Jesus Christ into our human space and time as a baby in a manger, as a man on a cross.

The great theologians of Christmas—Athanasius, Augustine, Bernard of Clairvaux, Martin Luther—plumbed the depth of the mystery of the Incarnation as expressed in the Creed of Nicea. They pondered these words: that the Lord Jesus Christ, God’s only begotten Son, God of God, Light of Light, very God of very God, he who was of one substance with the Father for all eternity, became incarnate by the Holy Spirit of the Virgin Mary and was made man—precisely for us human beings and for our salvation ( propter homines et propter nostram salutem ). In doing so, they echoed the words of St. Paul who wrote that “in the fullness of time, God sent forth his Son, born of woman . . . to redeem us” (Gal. 4:4). Although she is not mentioned by name in this text, this is the first reference to Mary in the New Testament.

In this season of the year it is good to remember that Mary belongs to all Christians—Orthodox, Catholic, and Protestant alike. All generations, and presumably all denominations, are meant to call her blessed (Luke 2:48). This, despite the fact that doctrinal teachings and devotional practices related to Mary (or, from another perspective, the lack of such) still constitute serious barriers to full visible unity among Christians. While these differences must be faced squarely, they should not blind us to the extraordinary gift that God has given to the entire Body of Christ in the blessed Mary.

In 1925, A.T. Robertson, a noted Southern Baptist New Testament scholar, published a book titled The Mother of Jesus in which he said: “I have felt for many years that Mary the mother of Jesus has not had fair treatment from either Protestants or Catholics . . . . She is the chief mother of the race, and no one should be allowed to take her crown of glory away from her.” If some have extolled Mary beyond measure, Robertson said, others have subjected her to “cold neglect.” Robertson was right. It is time for Evangelicals to recover a fully biblical appreciation of Mary and her role in the history of redemption. It is time to bring Mary in from the cold.

We can begin by recognizing that Mary is the person and the place where God has chosen for his glory—his radiant shekinah glory—to enter most deeply into the human story, which is the story of every one of us. By welcoming Jesus into her womb, Mary provided sanctuary—a hospitable space, if you will—for the uncontainable God in the midst of a hostile world. As T. S. Eliot put it in “Dry Salvages,” she is “the hint half guessed, the gift half understood . . . . Here the impossible union of spheres of existence is actual, here the past and future are conquered, and reconciled.”

This is why we cannot understand Mary apart from the long prophetic prologue of the Old Testament which flows into her standing in the temple with Anna and Simeon and all those who were “looking for the consolation of Israel. ”The virginal conception of Jesus foreseen by the prophet Isaiah (7:14) is a part of this tapestry, as is the declaration of Mary as Theotokos, the “one who gave birth to the one who was God,” as Jaroslav Pelikan translated this Marian title from the Council of Ephesus.

Mary was all of this, but she was also more. She was the one who heard the Word of God and who responded to it in faith. Thus she was a model of fides ex auditu —faith that comes from what is heard—namely, the promise and proclamation of Christ (cf. Rom. 10:17). For this reason, Mary’s overshadowing by the Holy Spirit has been often depicted in Christian art as something which came to her through her ear, which complements the other Marian motif of the handmaiden of the Word who sits in contemplation with her Bible opened. As Augustine and many others after him would say, Mary was a disciple before she was a mother, for had she not believed, she would not have conceived.

But there was no passivity in Mary’s faith. The Word which she heard and believed and in turn declared to others was filled with prophetic verve. We see this most dramatically in Mary’s Magnificat, which might be called the Battle Hymn of the Kingdom of God. This great anthem can still make tyrants totter and demons tremble (Luke 1:46-55).

Several years ago, Evangelicals and Catholics Together engaged in a vigorous discussion about Mary which resulted in the statement, “Do Whatever He Tells You: The Blessed Virgin Mary in Christian Faith and Life.” In some ways, this was our most difficult project. But, at the end of the day, we were able to conclude our work and our statement with a common prayer, the final wording of which was given by Fr. Richard John Neuhaus shortly before he died. This prayer, like Mary herself, is meant for all Christians.

Almighty and gracious God, Father of our Lord and Savior Jesus Christ who was in the fullness of time born of the Blessed Virgin Mary, from whom he received our human nature by which, through his suffering, death, and glorious resurrection, he won our salvation, accept, we beseech you, our giving thanks for the witness of Mary’s faith and the courage of her obedience.

Grant to us, we pray, the faithfulness to stand with her by the cross of your Son in his redemptive suffering and the suffering of your pilgrim Church on earth. By the gift of your Spirit, increase within us a lively sense of our communion in your Son with the saints on earth and the saints in heaven. May she who is the first disciple be for us a model of faith’s response to your will in all things; may her “Let it be with me according to your word” be our constant prayer; may her “Do whatever he tells you” elicit from us a more perfect surrender of obedience to her Lord and ours.

Continue to lead us, we pray, into a more manifest unity of faith and life so that the world may believe and those whom you have chosen may, with the Blessed Virgin Mary and all the saints, rejoice forever in your glory. This we ask in the name of Jesus Christ, who lives and reigns with you and the Holy Spirit, one God forever and forever.

Timothy George is dean of Beeson Divinity School of Samford University and chair of the Doctrine and Christian Unity Commission of the Baptist World Alliance. He can be reached at tfgeorge@samford.edu.