Amid the tumult of Election Night turned Election Week 2020, two United States senators made a striking and politically revolutionary claim: The Republican party will become a multiethnic, multiracial, and working-class party. Sen. Josh Hawley of Missouri tweeted “we are a working class party now. That’s the future.” Sen. Marco Rubio of Florida echoed the sentiment, tweeting that the GOP future is “a party built on a multi-ethnic multi-racial coalition of working AMERICANS.”

The Edison Research national exit poll found that Donald Trump’s support in 2020 rose among blacks (+4), Hispanics (+4), and Asians (+4), making Trump the most popular Republican presidential candidate among racial/ethnic minorities in sixty years. Among non-whites without a college degree, Trump’s support rose even more (+7); he won a quarter of their vote. Although he did not increase his vote percentage among whites without a college degree, Trump did maintain his national 2-to-1 lead. His persistent appeal is all the more remarkable outside the South. The white working class once largely followed the national mood, but no more. In 2020 they strongly favored Trump in Pennsylvania (+27), Nevada (+22), Michigan (+20), Wisconsin (+16), California (+16), Minnesota (+15), Maine (+11), and New Hampshire (+10) despite both the country and their states backing Joe Biden. Considering the clear tendency of polling in this election cycle to seriously undercount the Trump vote, the true values of all these figures are almost certainly higher.

The greatest sources of optimism for this new Republican coalition were the election returns from Texas and Florida, two of the country’s most racially and ethnically diverse states. Democrats had hoped to win both in 2020 as part of a “blue wave” that would sweep not only Donald Trump from the White House but Trumpism into the dustbin of history. Instead, the president actually increased both his number of votes and his percentage of the total vote in both states—not by winning back the traditional Republican country club set but by a wave of support from Hispanics.

The Florida exit poll showed Hispanic support for Trump there grew from 35 percent in 2016 to 47 percent in 2020. Even a reasonable doubt in the accuracy of exit polls cannot dispel the remarkable numbers from Miami-Dade County. At 68 percent Hispanic, Miami-Dade is by far the most Hispanic county in the country outside the Southwest. Trump’s relative vote increase there was nearly triple his statewide growth rate, and he upped his take of the county’s overall vote from 34 percent to 46 percent. Precinct-level analysis shows those gains were concentrated in Hialeah and Miami’s west side, home to Americans of Cuban, Central American, and South American descent. About half of Trump’s 2020 margin of victory in Florida came from the increased vote over 2016 in Miami-Dade County alone.

The story is even more remarkable among Americans of Mexican descent in Texas. Starr County, the most Hispanic in the country at 99 percent, increased its support for Trump over 28 percentage points. While this was the most dramatic county-level swing of the election, Starr County was hardly alone. Twenty Texas counties recorded swings toward Trump of 10 points or more, every one of them majority Hispanic and 17 of 20 over three-quarters Hispanic. While Trump won but two of those counties in 2016, he won nine of them in 2020. This is all the more striking in light of Trump’s failure to increase his percentage of the overall Texas vote at all. His support from Texas Hispanics increased from 34 percent to 40 percent, and a strong correlation (Pearson’s R = 0.74) exists between a county’s percentage of Hispanics and the percent increase in its vote for Trump. Despite every Democratic party politician and mainstream media outlet in the country branding Trump’s border policy as “racist,” seven of these twenty Trump-shifted Hispanic counties are located directly on the border, while twelve others are within 100 miles of it. 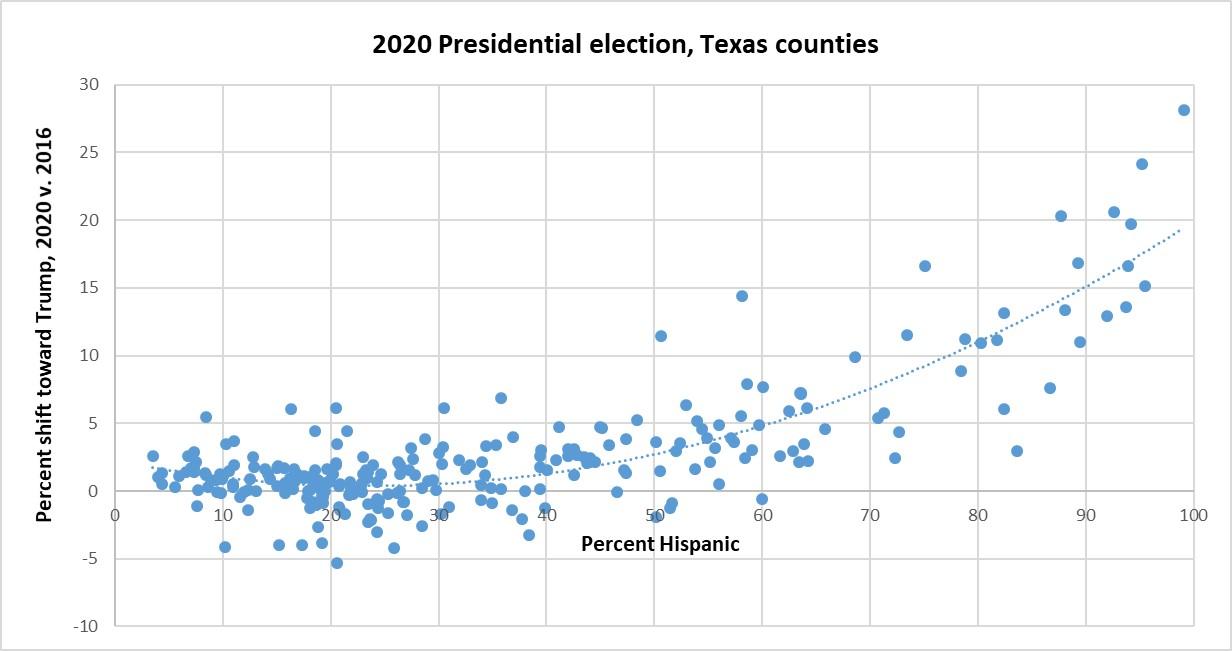 Of course, Trump and “Trumpism” is not the whole of the Republican party. This will be especially obvious after January 20. The new Republican economic populism has so far been realized mainly in trade matters—especially the renegotiated U.S.-Mexico-Canada Agreement with its more robust onshoring and labor protection provisions, and the “trade war” tariffs that have helped many U.S. manufacturing sectors. The party’s Chamber of Commerce wing, dedicated to individual autonomy, tax cuts, balanced budgets, and free trade, still exists. The House Freedom Caucus will be adding at least nine new members to Congress in 2021. Senate Republican advocates for a small second coronavirus stimulus package outnumber those who support a large one. Trump’s promised $1 trillion infrastructure spending package never came to fruition for want of strong Republican congressional support.

The upstart American Solidarity Party also wants to claim the populist political ground, and it did attract some conservative Never-Trump votes in the election. The fact that its presidential ticket made the ballot in only eight states while Kanye West was listed in twelve doesn’t speak well, however, of its political relevance. In America’s two-party system, a socially conservative, multiracial, multiethnic, working-class populism will be Republican or it will not be at all. Keeping the party on this trajectory after Trump will be a challenge for the right. This movement has prominent elected leaders in Senators Rubio and Hawley, but it needs more. This is especially the case in a closely divided Senate and House, where such Republicans willing to work selectively with Democrats could maintain Trump’s tough trade policy with China and bring about job training for industrial and skilled trades; greater regulation of Silicon Valley and Wall Street; stronger private-sector unions, paid family leave, child allowances—and the taxes to pay for them.

This movement also needs a socially conservative, working-class agenda at the state level. A perfect opportunity lies in the ObamaCare offer to pay for Medicaid expansion; governors and legislatures should take this offer, as many red states throughout the Midwest and Mountain west have already done. They should also increase access to state-run community colleges, even follow the lead of conservative Tennessee and make them tuition-free.

Without an active conservative populist agenda, the Republican party’s newfound electoral coalition will dissolve and the opportunity of a generation will be squandered. Fortune favors the bold. The future really is now.

Darel E. Paul is professor of political science at Williams College and author of From Tolerance to Equality: How Elites Brought America to Same-Sex Marriage.

First Things depends on its subscribers and supporters. Join the conversation and make a contribution today.