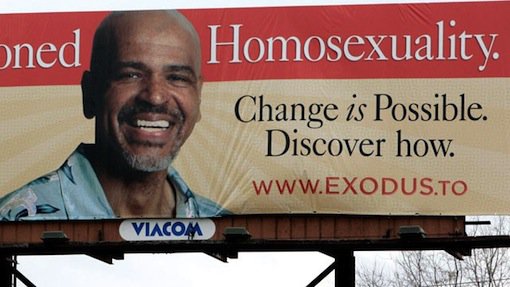 Some years ago, I read Alan Medinger’s book Growth into Manhood , written for Christians with unwanted same-sex attractions. Medinger, a giant in ex-gay circles, was the first Executive Director of Exodus International, the ex-gay umbrella group that has grown to almost three hundred ministries in eighteen countries, but announced it was closing operations this week with a letter of apology to the LGBT community widely circulated on the internet.

Growth into Manhood was marketed as a book to help homosexual men grow into “God-designed manhood.” Although “God’s original plan for our lives may have failed through human sin,” Medinger’s book assured me, “God will be our Father, and he will walk us through the process that will bring us to full manhood.”

I was unconvinced. Medinger may have seasoned his sinful advice with Christian-sounding waffle about God’s design for masculinity, but the contrast between his saucy suggestions and the stern words of Jesus in Matthew’s Gospel that a man who so much as “looks at a woman lustfully has already committed adultery with her in his heart,” could not be any clearer.

This is one reason why, as a Christian who embraces a traditional biblical ethic of sexuality, I rejoice at the closure of Exodus International. I rejoice not in spite of my traditional moral beliefs, but because of them. I thank Exodus for having preached, for a number of years, unpopular truths about the wrongness of a sexually active homosexual lifestyle, and insofar as the organization appears recently to have distanced itself from such an ethic, I share the disquiet of those who regret Exodus’ about-face. But the truth is that Exodus has for a long time obstructed efforts to evangelize gay and lesbian people and promote an authentic ethic of life-giving chastity in an attractive manner.

To detail all of the moral damage done by Exodus would require more than the brief thoughts I can offer here. There is, as Joshua Gonnerman pointed out , the false hope created by conversion therapy”a hope which causes many to simply abandon Christianity when it doesn’t materialize. There is also the dark problem of sexual abuse and child molestation within Exodus-affiliated and other ex-gay ministries and Exodus’ promotion of Freudian-based theories that cause division within the family by blaming parents for their child’s homosexuality.

But above all, attention needs to be drawn to this error of equating the sexual wholeness in Christ to which all Christians are called with the conscious experience of sexual attraction to the opposite sex. Under the guise of promoting a biblically grounded vision of human sexuality, this attitude has done very little to encourage homosexuals in developing the virtue of chastity. Instead, it simply throws fuel onto the fire of the modern secular obsession with personal sexual fulfillment by its implied acceptance of the claim that asking homosexuals to live without sex really would be to ask them to lead lives of misery and deprivation.

The considerable influence of an organization as large as Exodus on the wider Christian world means that echoes of their heterosexuality-as-holiness approach can be detected far beyond their own ministries. Exodus-related materials such as Growth into Manhood can be found recommended by chaplains from the Vatican-approved Courage ministry to homosexuals, by the Catholic Medical Association , and by the well-known same-sex attracted Catholic blogger Steve Gershom .

The closure of Exodus provides for Christians once again the opportunity to embrace the rigorous austerity of a genuinely gospel-based sexual ethic, which yes, makes it clear that homosexual relations are sinful, but also has plenty to say about divorce, heterosexual pornography, the contraceptive culture, and other aspects of the crisis of virtue within the Western world.

Whether secular therapists should be allowed to promote orientation change is a scientific question to be settled on the sole criteria of whether or not it is beneficial and effective. But the Christian Church has no business promoting a course of action that does nothing to make people holier. Let those who wish to pursue secular therapy do so if they feel it necessary, but let it not be confused with the gospel. The Church’s message must be the same message to both homosexuals and heterosexuals, in season and out of season: “You shall be holy to me; for I the Lord am holy.”

Aaron Taylor, a Ph.D. student in ethics at Boston College, holds degrees from the University of Oxford and from Heythrop College, University of London.