Ah, the winsome sounds of a grandson in meltdown sweep up to my study and inspire this reflection. I did not find it quite so irritating, I do not think, when the child that became his mother was doing the same thing at age four. In any case, he is learning: The sufferings of life begin early.

She, her husband, their two sons, counting the one presently yelling, have been visiting. My son-in-law is a U.S. Marine, transitioning from Washington, D.C. to Hawaii. Yeah, I know, tough duty, huh? He’s earned it, though. One previous posting was in a war zone advising Filipino marines. Still, distances being distant, we are not expecting to see them often over the next three years.

I put them all on the plane Tuesday. They flew first to California, switching flights there, and then on to the pearl of the Pacific. Their youngest son is nine months old and crawls faster than most high school sprinters run. That is not a flight I would wish to witness.

We had all the grandchildren here for the weekend, five grandsons and our lone granddaughter, and gathered them for a group photograph. It was like shepherding caffeinated squirrels, which is why I stayed home and avoided the studio. Besides, given the automobile caravan required, I didn’t figure there was room for me. 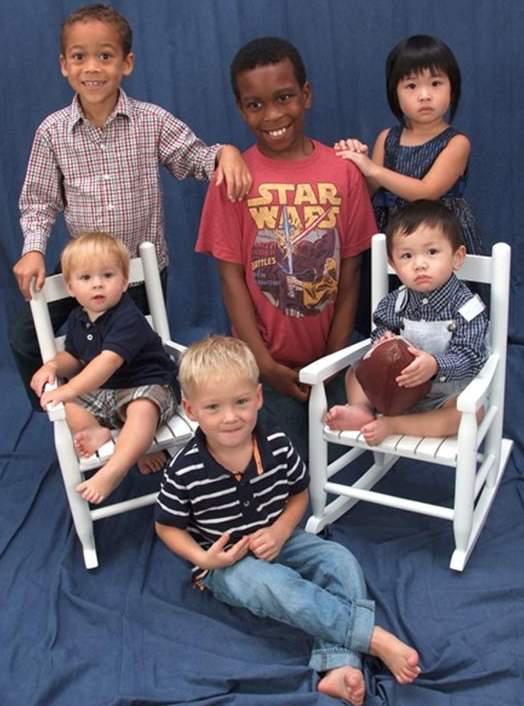 Distinctly though, the one granddaughter looks altogether out of place, don’t you think? This is why expectations are high that Number Three son and his soon-to-be-wife will narrow the gap between boys and girls.

We have not gone so far as to actually air this aloud, not to them. That’s not our style, my wife and me. I mention it here only because I do not want anyone to think we are pressuring them in any manner, and certainly not with such a ham-fisted approach as other grandparents we hear about; no, not a bit of that.

Our ways, you see, are more subtle. I merely point out I am not getting any younger and the sole granddaughter obviously yearns for someone to remedy the family gender chasm. Without a female peer among her cousins on this edge of the family gene pool, I do harbor some fear for her future development as a whole person. See: subtle, as I said.

I look at my sons with their children and my daughter with hers, and I am impressed by their parenting. I am pretty sure theirs is better than was mine. That is as it should be. The generations we foster are expected to be better parents than their parents were. I expect my children to make their own mistakes without my help. That is part of what growing up is all about, I figure.

That is some of the trouble with families. These are the people closest to us. Parents and children touch and shape each other so deeply, and in ways neither is always aware of, that over time it is often hard to know where the one ends and the other begins.

Children are the ones who might be most inclined to remember our worst moments. Yet in the best families, those failures never define our relationships. We may pray to find in one another other qualities to admire, respect, and perhaps imitate; most times we do find them. Still, I hope my kids know what in me needs to be avoided and what in them needs stimulation for happier living.

It is in our families that we learn many habits of thinking, a way of being in the world. Family is the first of the “mediating institutions” that cushions us against the impersonal bigness of the world and, at the same time, opens us to a wider civic life around us. To some the adage “charity begins at home” means “watch your own first and forget everyone else.” Yet to me it has never meant selfish tribalism or clannish chauvinism. I take it as a truism: Charity had better begin in the home, in the family, or for sure it will never show up anywhere else. The village can’t teach it, but a good family will.

Tolstoy’s Anna Karenina drops that line, “All happy families are alike; each unhappy family is unhappy in its own way.” But that is not true. Unhappy families come in a ubiquitous universal gray. Happy families find dozens of ways of being happy, come in all sizes from all places, and show up in every color imaginable. Like mine, I hope, but with more granddaughters.