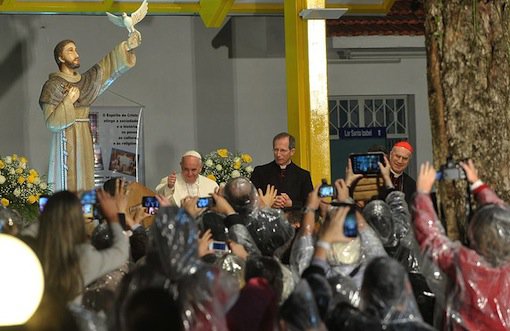 “I am a sinner.” That is the key for understanding Pope Francis. He tells us so at the very beginning of his interview with Antonio Spadaro, S.J., for Jesuit publications worldwide . “This is the most accurate definition. It is not a figure of speech, a literary genre. I am a sinner.” He is also, he says, “a sinner whom the Lord has looked upon,” and upon whom the Lord has had mercy. Sin and mercy are two of the key words emerging from the interview which, at over ten thousand words, offers us the best picture yet of the pope and provides a broader context for the words and gestures of his pontificate.

God’s mercy on sinners is the key in which Francis exercises the Petrine ministry. This represents no great change from the pontificates of John Paul II and Benedict XVI, who spoke frequently of the mercy of God and the reality of sin and, in the case of the former, wrote an entire encyclical on the divine mercy. The papacy is not a presidency in which new leaders offer new policies and rebrand their party’s message. But each pope has a different way of living out the charism entrusted to him. He refracts the truth of Jesus Christ into different harmonies of color. John Paul reminded us that Jesus Christ reveals the truth about God and about the human person to all. Benedict taught us that the truth is a person, Jesus Christ, with whom we enter into a relationship of love. Francis tells us that we are sinners who have found mercy. The same melody, in different keys.

Like his predecessors, Francis returns to the Church’s storehouse of images, this time to retrieve the patristic understanding of the Church as a hospital for sinners.

“I see clearly,” he says, “that the thing the church needs most today is the ability to heal wounds and to warm the hearts of the faithful . . . . The church has sometimes locked itself up in small things, in small-minded rules. The most important thing is the first proclamation: Jesus Christ has saved you. And the ministers of the church must be ministers of mercy above all.”

Francis sees those to whom the Church is called to minister as deeply wounded, as walking off a battle field. This underscores his profound sense of sin and idolatry that have emerged in writings and homilies. Sin is grave and real and kills souls. Our souls, therefore, require the most potent and unexpected medicine of all: the mercy found in the blood of Jesus Christ. Like any good triage specialist, the pope knows that you give the most critical medicine first. That is why, first and foremost, he preaches the mercy of Christ. Mercy, he clarifies, is neither rigor nor laxity. It neither ends in condemnation, nor in a false sense of comfort that one is not diseased. It says what Francis says of himself: “You are a sinner, and the Lord has looked upon you with mercy.”

Since this is the heart of the gospel, all other aspects of Catholic truth presuppose and proceed from it. All the controversial parts of the faith can only be understood in light of this fundamental truth. During and before his papacy, Benedict repeated this again and again. The heart of the gospel must be understood so that the moral teachings can be understood. Even in ordinary homilies, Francis underscores, evangelical proclamation must precede “moral and religious imperatives.” The teaching of the church on matters of sexual ethics is clear, Francis says, and he wants to be clear that he upholds it. It is clear because John Paul II and Benedict XVI made it clear. Francis speaks with the confidence of a man firmly rooted on their foundation. When he talks about the role of women in the Church, for example, he offers a summary of John Paul’s Mulieris Dignitatem . He sees his job not as revising, but as clarifying the spirit that animates that teaching and makes it comprehensible.

How he does this is a matter of discernment along the journey toward Christ, two other key terms for understanding Francis. He claims he is not comfortable with the masses, as John Paul II was. Rather, he seeks to minister to individual people. He left the apostolic palace not because it was luxurious, but because he sought a community with which he could travel toward Christ. He values magnanimity, having “a big heart open to God and to others.”

Whether he talks about thinking with the Church, ministering to gay persons, or ecumenism with the Orthodox, the same metaphor of walking together on a journey appears. The Christian life is not a dogmatic ideology, but one sinner inviting another to walk along the way to Jesus Christ. It is not a “lab faith” to keep in your head, but a “journey faith” to be lived out”and to be challenged and deepened in that living-out. “God is always a surprise, so you never know where and how you will find him,” Francis says. Hence the need for discernment in traveling along the way.

We also must be willing to be encountered by Christ on that journey. “We must enter into the adventure of the quest for meeting God; we must let God search and encounter us.” This means hoping that even in the lives with the greatest brokenness and unbelief, God can still break in. It helps to explain the pope’s comments on atheists who follow their conscience. Francis was not calling for Pelagianism or works-righteousness. Rather, he was inviting unbelievers to travel with him and praying that Jesus will call many who, like Matthew, were not expecting him.

And yet there is no doubt that something is different with this pope. Why can he say what his predecessors say, yet make it sound totally different? Why is he touching the hearts and minds of those whom John Paul and Benedict could not reach? One answer might be that he is a prophet, while they were teachers. When Fr. Spadaro asked him what the specific place of consecrated religious is in the Church, Francis said that it is prophecy. Religious are called to be prophets by demonstrating how Jesus lived on earth and proclaiming how the kingdom of God will be in its perfection. This does not make them opposed to the hierarchical part of the Church, but the two functions do not coincide. Francis continues: “A religious must never give up prophecy . . . . Prophecy makes noise, uproar, some say ‘a mess.’ But in reality, the charism of religious people is like yeast: prophecy announces the spirit of the Gospel.”

It is not hard to see Francis describing himself in those words. Prophets preach through action as much as words. Hence Francis’ careful use of prophetic acts, from washing the feet of imprisoned teenagers to promising to baptize an unwed mother’s son. Prophets make us uncomfortable. They do make a mess, but thereby lead us to sanctity. Prophets also are easily misunderstood. As a colleague of mine put it, the prophetic voice leaves much to be fleshed out. It is easy to read many things into the broad strokes with which Francis paints. But Francis has given us keys for understanding his papacy: sin, mercy, discernment, journey, and prophecy. We must meet Francis with the openness for which he asks, not fitting him into our own agendas but ready to receive the gospel even when he preaches it in unexpected ways.

Nathaniel Peters is a doctoral student in theology at Boston College. Image from Wikimedia Commons.