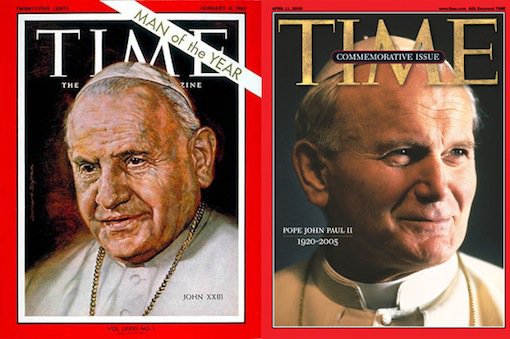 I doubt that Pope Francis has heard of Ernie Banks, the Hall of Fame shortstop. But like “Mr. Cub,” whose love for baseball led him to exclaim “Let’s play two!” before Sunday doubleheaders in the 1950s, the pope from the end of the world seems to think that papal canonizations are better in tandem: hence the Sept. 30 announcement that Blessed John XXIII and Blessed John Paul II will be canonized together on Divine Mercy Sunday, April 27, 2014.

Predictably, the decision caused some unhappiness in some quarters.

Some Poles wanted John Paul II canonized by himself. Some who welcomed the decision to canonize John XXIII are disgruntled that “their” pope has to share the billing with the pope they think hijacked John XXIII’s Vatican II. The aggrieved Poles should (and most will) recognize that, while John Paul II brought uniquely Polish insights and experiences to the papacy, he now belongs to the entire world Church. The aggravated partisans of John XXIII should, but probably won’t, concede that the “John XXIII” they’ve have constructed in their imaginations bears little resemblance to the real John XXIII, and that the charge of Council hijacking is ludicrous.

In fact, it might be reasonably speculated that Pope Francis liked the idea of a papal canonization doubleheader precisely because it will underscore the continuity between John XXIII’s intention and John Paul II’s authoritative interpretation of Vatican II: Vatican II was intended to prepare the Church for the challenges of evangelization in late modernity, an intention realized by John Paul II’s use of the Council’s teaching to launch the world Church into the New Evangelization of the third millennium.

Vatican II differed from the previous 20 ecumenical councils in that it provided no authoritative keys for its proper interpretation. Unlike other councils, it defined no dogmas, condemned no heresies (or heretics), commissioned no catechism, wrote no new canons into the law of the Church. Vatican II did give the Church 16 documents of differing magisterial “weight,” but it provided no interpretive keys to its body of teaching. The result was 20 years of argument, sometimes quite bitter. And in those arguments, as Benedict XVI put it, the idea of Vatican-II-as-rupture-with-the-past (which seemed to detach the Church of the future from its historical and doctrinal moorings) contended with the idea of Vatican-II-as-development-of-the-authoritative-tradition-of-the-Church (the tradition providing the reference points for grasping the true meaning of the Council).

At the very outset of his pontificate in 1978, John Paul II said that the full implementation of Vatican II would be the program of his papacy. He kept that pledge, providing authoritative interpretations of virtually all of the Council’s documents through his own encyclicals, apostolic letters, and post-synodal apostolic exhortations. Perhaps most importantly, he called a special meeting of the world Synod of Bishops in 1985, to assess what had gone right, and what had gone not-so-right, in the twenty years since Vatican II closed on Dec. 8, 1965. That synod, in turn, offered the Church a connective thread with which the various pieces of Vatican II might be woven together into a full tapestry, by describing the Church as a communion of disciples in mission. Catholicism begins with Christ (hence discipleship); those disciples are joined in a community, a “communion,” that is different from any other association because it is the mystical body of Christ; that “communion” exists for mission”to spread the Gospel and offer men and women the possibility of friendship with the Lord Jesus Christ.

The liveliest parts of the world Church today are found where Catholics have embraced this vision of a communion of disciples in mission; the dying parts of the world Church are those that cling to the false idea of Vatican-II-as-rupture. Pope Francis, who urges the Church to avoid being “self-referential” and to get about the business of spreading the healing message of the Gospel, is very much a pope of the New Evangelization, which he understands to be a fruit of Vatican II.

And that’s why it’s entirely appropriate for him to canonize John XXIII and John Paul II the same day.

George Weigel is Distinguished Senior Fellow of the Ethics and Public Policy Center in Washington, D.C. His previous “On the Square” articles can be found here .