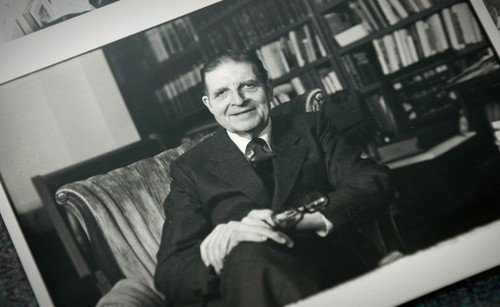 American evangelicals and serious theology are not terms that just naturally snuggle up to one another with easy equipoise. That, despite the fact that Jonathan Edwards, the greatest theologian America has yet to produce, stands at the headwaters of the evangelical tradition. The diminution of the evangelical mind since Edwards”and not only in theology”has been often rehearsed. The lure of pragmatism, individualism, revivalism (not to be confused with revival, about which Edwards knew a thing or two), expressivism, and fissiparous fundamentalism have all taken their toll when it comes to the nurturing of a theological tradition that is wise and deep. But in recent history, there is one evangelical theologian who stands above others in depth of insight and clarity of vision: Carl Ferdinand Howard Henry.

Born in New York City in 1913, Henry came of age at a time when the modernist-fundamentalist battles were going strong. But he heard no talk of these struggles, nor of anything else religious, at the family dinner table. His father, a master baker from Germany, was a nominal Lutheran; his mother, a nominal Catholic.

Skilled in typing, Henry landed a job as a sportswriter. He eventually became a reporter, then an editor of the small paper on Long Island, while also writing stories as a stringer for The New York Times . By all accounts, he was a hard-nosed journalist given to pagan pleasures, with no knowledge or use for God, much less the church.

His conversion to Jesus Christ was dramatic, unexpected, and unforgettable. Sitting alone in his car in 1933, he was startled by a violent thunderstorm”shades of Luther. He later described this event in this way:

A fiery bolt of lightning, like a giant flaming arrow, seemed to pin me to the driver’s seat, and a mighty roll of thunder unnerved me. When the fire fell, I knew instinctively the Great Archer had nailed me to my own footsteps. Looking back, it was as if the transcendent Tetragrammaton wished me to know that I could not save myself and that heaven’s intervention was my only hope.

Henry the convert became Henry the evangelist and Henry the student. He went on to earn two degrees from Wheaton College, where one of his classmates was the young Billy Graham, and eventually a Ph.D. from Boston University under Edgar S. Brightman.

Soon after the National Association of Evangelicals was formed in 1942, the Christian Century announced in a headline, “Sectarianism Receives New Lease on Life.” But sectarian retrenchment was the last thing Boston pastor Harold John Ockenga, the ringleader of the so-called New Evangelicalism, or the far-thinking Carl Henry had in mind. In 1947 Henry published The Uneasy Conscience of Modern Fundamentalism , a seventy-five page booklet that sold for one dollar per copy. Henry called on his fellow evangelicals to leave behind the legalism, obscurantism, and judgmentalism that had left a blight on conservative Christianity in the twentieth century. Sectarian isolation, Henry said, must give way to evangelical engagement. The new movement had its manifesto.

In 1956, Henry was invited to become the first editor of a new publication, Christianity Today . It was to be “a magazine of evangelical conviction,” a thoughtful conservative alternative to the more liberal Christian Century . In his first editorial, Henry told his readers that he could see the lawn of the White House from his office. He was saying, in effect, that evangelicals would no longer be confined to the gospel ghettos of the culture. The mission of the evangelical church was both personal and public. The aim was to capture minds as well as save souls, to struggle for a just social structure as well as to preach the Gospel to the ends of the earth.

To accomplish these goals, Henry not only wrote editorials, he also published serious theology. He wrote more than forty books in his lifetime, dealing with a range of issues from theological ethics to higher education and human rights. One of his most interesting essays was called “Christian Fund-raising Heresies.” But his magnum opus was a massive six-volume study, God, Revelation, and Authority , published from 1976 to 1983. It contains more than 3,000 pages, and none of them is meant for light bedtime reading. God, Revelation, and Authority is not a systematic theology proper but rather a sustained theological epistemology offering a comprehensive overview of revelation in biblical terms”the living God who speaks and shows, who stands and stays, who stoops and saves.

God, Revelation, and Authority is an extended discourse built around fifteen principal theses. Luther had ninety-five, Henry had fifteen. The first of Henry’s fifteen theses is the most important, the basis for all the others: “Revelation is a divinely initiated activity, God’s free communication by which he alone turns his personal privacy into a deliberate disclosure of his reality.” He argues that all merely human affirmations about God that are based on something other than his divinely initiated, freely communicated, and deliberately disclosed reality will inevitably curl into a question mark.

The awesome disclosure of God precipitates human surprise. Perhaps thinking about his own encounter in the thunderstorm, Henry declares that divine revelation is “like a fiery bolt of lightning that unexpectedly zooms towards us and scores a direct hit.” Or, it is like an earthquake that suddenly shakes and engulfs us. Or, it is like “some piercing air-raid siren” which sends us “scurrying from life’s preoccupations and warns us that no escape remains if we neglect the only sure sanctuary.”

When Henry says that such encounters bear the character almost of a fresh miracle, he is quite close to Karl Barth’s statement that those who are enabled by grace to cry out, “Lord, have mercy upon us,” have actually received a miracle no less remarkable than the virginal conception of Jesus or the creation of the world out of nothing. Henry’s ongoing and sometimes severe criticism of Barth has obscured important points of contact between the two. This is shown in productive theological debates Henry carried on with Hans Frei and Brevard Childs, two Barth-shaped theologians at Yale.

When placed against the landscape of the wider theological terrain, Henry and Barth were perhaps “siblings under the skin,” to borrow a phrase Frei used in another context. Both Henry and Barth were accused of revelational positivism, both were severe critics of natural law (see Henry’s First Things essay “Natural Law and a Nihilistic Culture” ), and both rejected the construals of neo-Protestant liberalism as heresy. In 1962, during Barth’s only visit to America, he and Henry had a famous exchange at George Washington University. In an open forum, Henry identified himself as the editor of Christianity Today and posed a question about the historical factuality of the resurrection of Jesus. In a humorous but scornful tone, Barth replied: “Did you say Christianity Today or Christianity Yesterday ?” When the laughter in the room subsided, Henry came back with this retort: “Yesterday, today, and forever.” Two years later, on a trip to Europe, Henry visited with Bultmann in Marburg and with Barth in Basel. Henry later said that he felt no spiritual connection with Bultmann, but “whenever I conversed with Karl Barth I had the clear sense that, however flawed was his dialectical theology, I was in the presence of a believer in the Gospel.”

During the latter years of his life, Henry became theologus non gratus within large sectors of the evangelical academy. In far less nuanced fashion than the post-liberal criticism he had received from Frei and Childs, post-conservative, post-evangelical, and semi-postchristian critics blasted Henry for what they called his pure propositionalism and conformity to the canons of Enlightenment rationalism. But Kevin J. Vanhoozer, an evangelical theologian whose own work approaches that of Henry in acuity and insight, has been much more balanced. Using speech-act theory as an aid to understanding biblical discourse, Vanhoozer criticizes Henry for his lack of interest in genre along with some of his hermeneutical presuppositions. But Vanhoozer is a friendly critic and openly admits, “Carl Henry said the right thing at the right time.”

In a tribute I wrote on Henry at the time of his death in 2003, I predicted that, despite his eclipse at the time, a new generation of evangelicals would arise to rediscover Uncle Carl and once again find his work vibrant, provocative, and relevant to the issues of the day. Now, ten years after his death and one hundred years after his birth, my prediction is coming true. Led by Gregory Alan Thornbury’s superb new book, Recovering Classic Evangelicalism: Applying the Wisdom and Vision of Carl F. H. Henry , a new wave of interest in Henry is apparent. This centennial year has been marked by Henry conferences, symposia, published essays, and other books on the way.

There is a sense that postmodernism with its stops, gaps, and radical breaks with all traditions of received wisdom is suffocating in its own exhaust fumes. This is a good time to affirm something truly awesome: that the God of eternity, the Creator and Lord of time, has come among us as one of us in the person of his Son, Jesus Christ, and that this God still speaks to troubled and confused human beings using “comprehensible ideas and meaningful words.”

I applaud and welcome the Henrician renaissance now under way, with this one caveat: What we need is not a repristination of Henry, nor a new defense of his methods and views in every respect, but rather a renewed commitment to doing theology in the service of the church, and to doing it with a Henry-like passion for truth, and with love for the God who is both the source and object of truth.

In the closing paragraph of God, Revelation, and Authority , Henry describes the wonder and joy that is the true calling of every theologian, and of theology itself. He points us to the contemplation of the living God of creation and redemption, the God who stands and stoops and speaks and stays.

He it is who preserves and governs and consummates his cosmic purpose. But the awesome wonder of the biblical revelation is not his creation and preservation of our vastly immense and complex universe. Its wonder, rather, is that he came as God-man to planet Earth in the form of the Babe of Bethlehem; he thus reminds us that no point in the universe is too remote for his presence and no speck too small for his care and love. He came as God-man to announce to a rebellious race the offer of a costly mercy grounded in the death and resurrection of his only Son and to assure his people that he who stays will remain with him forever and they with him. He is come in Christ incarnate to exhibit ideal human nature and will return in Christ glorified to fully implement the Omega-realities of the dawning future.

Timothy George is founding dean of Beeson Divinity School of Samford University and chairman of the board of the Chuck Colson Center for Christian Worldview. His email address is tfgeorge@samford.edu.