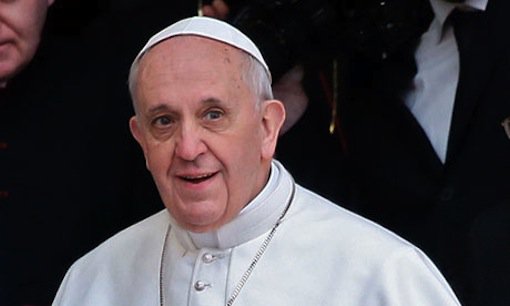 I don’t know how many pro-free market Catholics there are, but I sure know a lot of them, and when the Pope speaks on economics, we (and I very much include myself in this “we”) tend to either plug our ears and ignore it, or else confidently and even irreverently dismiss it (here’s an example of me doing it to Pope Benedict XVI, in French).

Neither of those approaches can suffice.

For if we are faithful Catholics, we do believe in the Spirit-led authority of the magisterium. Now this is usually the point when all of us suddenly become canon lawyers and note that the Church’s social doctrine is not endowed with ex cathedra infallibility and Catholics are allowed to dissent—and may even have a duty to do so. Sure. But is this the most Gospel-driven way to relate to our “Mother and Teacher”?

To be a Christian is to be willing to be challenged, all the time, and to have the humility to let yourself be challenged—including, for Catholics, by the Church.

As people with strongly held economic views who take part in the public debate, we have acquired a certain toughening of the hide. We have become accustomed to thinking of ourselves as being part of a team, and to responding reflexively when we hear the rhetoric of the other team.

What the Church asks of us is to let go of our defenses and make ourselves open to her magisterium. Without abdicating discernment, we also have to force ourselves to open our hearts and let ourselves be challenged by Pope Francis’ words.

When Pope Francis describes inequality and exclusion as very grave moral sins, we must let ourselves be challenged, and we must open our hearts.

For me, the financial crisis was an eye-opening moment. I’ve long believed in free market economics and believed that the Church would do a lot of good in the world if it embraced it. And I still believe those things. But what the financial crisis has laid bare is that the most conventional version of free market economics was actually dead wrong.

It would have been a pastoral, doctrinal, and theological disaster if the Church had, over the past twenty years, blindly subscribed to what I’ll now refer to as the Washington Consensus. What in 2006 looked like the invisible hand of the market leading the financialization of the economy turned out to be a disastrous instance of crony-capitalist central planning. And when the Pope denounced it, I was among those condescendingly explaining to him that he didn’t get it. What it turns out is that economists actually know very, very little, and that a lot of what we thought we knew turned out to be wrong. Given this hard-to-swallow fact, the prophetic voice of the Church that reminds us of what must be the ends of economic activity is very salutary.

We as economic thinkers and commentators must take seriously Pope Francis’ calls for a more humane, more equal, more inclusive economy. When hard money types hold to a moralizing vision of the economy whereby recessions are punishment for excesses and lead to a worldview that says to the poor “suck it up,” and “ stay marginalized ,” we should heed Pope Francis’ call for more equality and more inclusion. The answer of economic policy to unemployment must not just be “Move to North Dakota to get an oil shale job.” We should in fact be very mindful of promoting economic policies that target full employment and are inclusive.

When free market types innocently believe that all deregulation will necessarily create a rising tide that will lift all, including the poor, while we must not impugn their discernment and their good intentions, we have to say that they must let Pope Francis’ words sow the seeds of doubt, especially when mounting evidence suggests that poverty is such an intractable, difficult problem .

Pope Francis’ call is not a governing agenda. We must, however, let it be a wake up call. We must look first at the impact of the policies we promote on the poor and the marginalized, and keep their interests in line first. And this is something Milton Friedman would agree with, by the way. Would most of his disciples? Rhetorically, sure.

But in the conservatarian community I’m a part of, while I see a lot of good intentions and good ideas, do I see enough concern towards directly addressing poverty and looking at everything through the lens of poverty and inclusion, including in my own work? I have to say that the answer is no. And certainly we must say we can always do better.

I am reminded of Sen. Mike Lee’s excellent speech on poverty. It’s truly great. But how much energy is devoted in free market circles to seriously discussing and debating poverty? What percentage? I have to admit that while I most often disagree with their prescriptions, there is a sincere and overwhelming concern for the poor that is more present in the progressive coalition than in my own. We must not be afraid of this concern for the poor that Pope Francis calls us to. We must make it our own and embrace it.

I am reminded of someone like G. K. Chesterton, who is often thought of as a “conservative’s conservative,” but who instead of contenting himself with denouncing socialism and defending what is good about markets, pushed himself to make key contributions to the rich (and underexploited) Catholic school of distributism.

I often think of someone like the Servant of God Dorothy Day, Obl.OSB. If she saw a list of the economic policies I support, she would probably be horrified. But I find myself very often enriched by her radical critique of the state, her trust in bottom-up forms of economic organization, and her keen awareness of what is often the reality of economic exploitation.

There is a place for discernment, and for advocacy, and even for confrontation. But I think that as Catholics we are also called upon to take the Pope’s message seriously, humbly, and to let it challenge us and to incorporate it into our own thinking, under the guidance of the Holy Spirit. For this I’ll pray.

Pascal-Emmanuel Gobry is an entrepreneur and a writer.