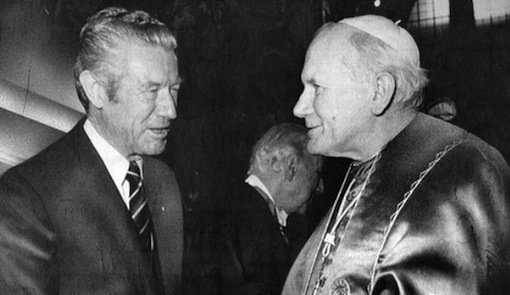 “Congress will probably never send a Minister to his Holiness,” John Adams once wrote. Two hundred and five years later, Ronald Reagan proved him wrong. Today marks thirty years since the establishment of diplomatic relations with the Holy See, a feat that did not come easy.

Ronald Reagan appointed his longtime friend and ranchero William A. Wilson to be his personal envoy to the Holy See in 1981, but a birthday entry in the president’s diary indicates Reagan wanted more for Wilson. The Gipper griped that the State Department was taking “forever” to clear his appointments and that somebody ought to “get off his ass and do it.” Reagan wanted Wilson approved soon “so he can meet Pope (he’s to be Ambas. to Vatican) in Alaska.” Standing in Reagan’s way was an 1867 law, passed amid open anti-Catholicism, that banned funds “for the support of an American legation at Rome.”

Reagan met Wilson in California during Reagan’s campaign for Governor and became close friends after a few rides on horseback. When the Reagans were on the house hunt after leaving Sacramento, Bill Wilson knew just the place in the Santa Ynez mountains. “I took one look at the view and was ready to buy,” Reagan wrote in his autobiography. Rancho del Cielo, as Reagan named it, “cast a spell over us.” It was his “open cathedral.”

Wilson spent a lot of time at the Ranch and even helped decorate—at least when it came to the religious art. Hanging in the Ranch bathroom is an icon of the Blessed Virgin Mary and the Christ child. Even though Reagan was a Protestant, he prayed often with Catholics in his administration and was what John O’Sullivan called “a cultural Catholic.”

Reagan’s determination to establish formal diplomatic relations with the Vatican was not shared by all—not even by those in his own Cabinet. Reagan, Wilson wrote to then-Senator Charles Percy, “was under the impression that this post was equivalent to a full ambassadorship and I think he believed that the office had the status accorded a fully accredited embassy.” Reagan went to Congress in late 1983 to have the 1867 amendment repealed, but his Secretary of State George Schultz did not back the move. Things got so bad, Wilson recalled in 2000, that at a 1983 party Schultz was “very angry,” and even quipped that Wilson would end up “regretting” his support for formal relations with the Vatican.

Reagan was at the Palm Desert party, too. The President told Wilson that “This matter is now in the White House,” assuring him that Schultz had lost. In January 1984 the anti-Catholic law had been repealed and Reagan elevated Wilson to Ambassador to the Holy See. The skirmish in Reagan’s Cabinet was over, but Protestants in Congress and on K Street were not finished protesting.

Senator Jesse Helms was among the most vocal. After ending the hold he placed on Wilson’s confirmation, he cast the only Foreign Relations Committee vote against Wilson and said: “I just can’t bring myself to vote for any ambassador to the Holy See.” Representatives from several Protestant denominations testified at Wilson’s confirmation hearing against establishing relations with the Vatican and argued it was a violation of the separation of Church and State. It showed an “abysmal lack of sensitivity to the non-Catholic community,” they said. The Vatican was an “artificial State” and to argue otherwise was “Orwellian doublespeak.”

Some were more shrill. Missionaries would be jailed and killed, a Baptist representative testified. Interfaith relations would be irrevocably damaged, another argued. The National Council of Churches went so far as to say that if there is any rise in anti-Catholicism, “responsibility will rest with those who precipitated the issue and not with those who object.” The Rev. Jerry Falwell told the New York Times that “if they give one to the Pope, I may ask for one.”

In the end, none of the Protestant objections persuaded Congress. Wilson was confirmed and continued to facilitate the important relationship between the United States and the Holy See, and between Ronald Reagan and John Paul II.

In June of 1982, Reagan and the Pope sat alone in the Vatican Library for almost an hour discussing their “divine mission.” Reagan said to the Pope of their surviving assassination attempts: “Look how the evil forces were put in our way and how Providence intervened.” As Paul Kengor explains in God and Ronald Reagan, “Reagan and the Pope translated their divine mission into a practical mission to maintain Solidarity,” Poland’s anti-Communist labor movement. A cardinal close to the Pope admitted “the Holy Father and the President committed themselves and the institutions of the church and America to such a goal.”

Reagan and Wilson sought, and received, the Vatican’s invaluable cooperation in assigning the Soviet Union to the ash heap of history.

Nicholas G. Hahn III is the editor of RealClearReligion.org and author of a forthcoming book on William A. Wilson. Follow him on Twitter @NGHahn3.