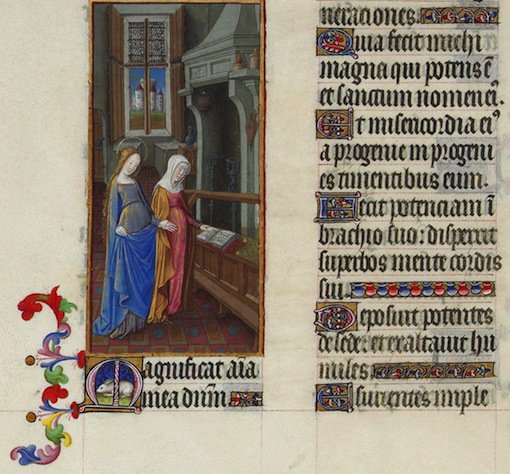 Today is the fifth anniversary of Fr. Richard John Neuhaus’ death. The following appeared in the tribute issue (April 2009)—ed.

The Richard I knew and loved was a man of prayer and of liturgy. He knew that the greatest gift we could offer to God was not our words, not our ideas, not our projects, but a heart ablaze with the fire of love. “Honor and glory belong to God alone,” said St. Bernard, “but God will receive neither if they are not sweetened with the honey of love.”

Anyone invited to Richard’s home for dinner knew that you were expected to arrive a little before seven, to be in place when evening prayer began. Each night, with the young people living in the house, Richard and Fr. Larry Bailey, his friend of many years, would gather to sing evening prayer, and on many evenings guests would swell the company.

After his cancer was diagnosed I came to New York to spend the day with him. On that evening, December 17, others in the house had gone to a meeting in Washington, and only Richard and I were present. He was too weak to stand, yet he insisted that we sing evening prayer. So the two of us joined our voices in song, Richard leading as I tried, vainly, to keep him in key.

A few days before his death, in the hospital room at Sloan-Kettering, when the time for evening prayer arrived, our little group reached for our breviaries. We were inclined to say the office, but decided to sing and the words of the Magnificat; “My soul proclaims the greatness of the Lord,” resounded through the halls of the hospital. Richard was not fully coherent, but I was standing next to him holding the book so he could see the words. When we came to the Gloria Patri at the end of each psalm I noticed that he joined in, his faltering voice merging with ours. That was the last time I prayed with him.

The habit of prayer was formed in him as a young theological student at Concordia Seminary in St. Louis. Under the leadership of our revered professor Arthur Carl Piepkorn, we would gather in a tiny chapel with a few of our classmates to sing evening prayer. And one year, when eight of us lived in a large apartment together, we would chant compline in Latin before retiring.

His love of liturgy was most evident in his years as a young pastor at St. John the Evangelist Lutheran Church in Williamsburg in Brooklyn. There one could participate in the richness of the Lutheran liturgical tradition, and Richard soon became a leader in the liturgical movement and editor of Una Sancta, a journal devoted to liturgy and theology. It was during those years that he came to know Avery Dulles and recruited him to serve on the editorial board.

Of course there were many other sides to Richard, and much has been said about his skill as a leader, his indomitable spirit, his intellectual acuity, his quick and ready pen, his gift of language, his ability to organize and marshal diverse coalitions in a common cause, and most of all his boundless confidence. No matter how grave things might seem, Richard always saw reason for hope. And to support this hope he was prepared to comment on everything boisterously and with unwavering certainty. As Alexander Hamilton once said: “I will not amuse you with an appearance of deliberation when I have decided.”

But in the midst of all his projects and causes, he was first and last a man of the Church. From the time he began college in Austin, Texas, in preparation for entering the seminary, his life was centered on the Church. All of his other activities grew gradually and naturally out of his service at the altar, preaching in the pulpit, and care of souls. Though he worked for a just society, he did not believe the Church is an agent of social betterment. The Church’s mission was to bear witness to the Resurrection of Christ, to train people to worship and serve God, and in our day also to defend the justice due all human beings made in the image of God. He was convinced that the gospel would not be heard in its fullness, nor could the Church serve the sick and needy, the helpless and the forgotten, if Christian faith could only be practiced within restricted precincts.

Richard had a rare gift for friendship. He loved being in the company of his friends, and many evenings his home was filled with people eating and drinking, arguing and laughing, and on occasion singing. There was much bonhomie, but he knew that friendship was more than good times. He did not take his friends for granted. Friendship, like a garden, needs to be tended and cultivated. And for friends whose work is taken up with ideas and words, that meant taking seriously what they wrote. His friends knew that if they sent him something they had written he would respond quickly with sympathetic criticism and warm appreciation. He also knew, as St. Aelred, the twelfth-century Cistercian, wrote, that friendship is never based simply on human affection. “Friendship is a stage toward the love and knowledge of God.”

Richard enjoyed this kind of friendship not only with Christians. Two of his closest friends were Rabbi Abraham Joshua Heschel and Rabbi David Novak. Richard used to call Heschel on Saturday evenings after the Sabbath to talk. He called Heschel “Fr. Heschel,” and Heschel called him “Rabbi Neuhaus.” And each summer he would invite David Novak to his cottage in the Ontario valley for two days of conversation. As David has said, he would bring the kosher food and Richard would provide the liquor and the opinions. Though Richard told me that along with the food David brought a bundle of opinions of his own.

Richard made friends easily with young people. He delighted in their company and spent time with them, he welcomed them to his table with distinguished visitors, he listened to them and treated them with the same generosity of spirit he showed his more accomplished friends. Aelred said that true friendship either finds equals or makes others equal. Richard made his young friends equals.

I remember the words St. Ambrose spoke at the funeral of his dear brother Satyrus. Shortly before he died Richard told me that one regret he had was that he had not learned Latin better, but the Latin is good enough to quote. Ambrose said: Non enim perdidi usum tui, sed commutavi (“I have not lost the benefit I had from you, but its nature has changed”); ante corpore inseparabilis, nunc individuus affectu (“previously we were joined in constant physical proximity, now it is in our affections that we are one”); manes enim mecum, at semper manebis (“for you abide with me and will abide with me always”).

Robert Louis Wilken, chairman of the board of the Institute on Religion and Public Life, is William R. Kenan, Jr. Professor Emeritus of the History of Christianity at the University of Virginia.