Amy Coney Barrett is my neighbor and friend. This fact, along with my complete lack of familiarity or expertise in her scholarly and judicial work, gives me no special insight into how she will adjudicate as a justice of the Supreme Court, assuming she is confirmed by the Senate.

But neither does anyone else know how she will adjudicate—quite possibly, not even Judge Barrett herself. The fact is, even her closest friends, and experts with the most advanced knowledge of her legal and judicial writings, have no special insight into how she will eventually rule in some of the most contested cases likely to come before the Court in future years. In coming days and weeks, we will be subjected to competing narratives over Judge Barrett’s judicial philosophy, presented with confident certainty about how she will decide cases in light of previous writings and decisions. Color me skeptical over what the experts tell us to expect.

Instead, what we know for certain is that justices appointed by Republicans in order to pursue restrained conservative jurisprudence, or even certain desired conservative outcomes such as overturning Roe v. Wade, have frequently and notoriously defected at critical moments. Justice Anthony Kennedy—appointed by Ronald Reagan—consistently offered the fifth vote upholding Roe and became the lead architect in crafting a regime of gay rights. Justice David Souter (appointed by George H. W. Bush) simply became a reliable liberal vote. Justice John Roberts, appointed by George W. Bush, switched a previous vote to join a majority in overruling Louisiana’s limits on abortion. And Justice Neil Gorsuch, appointed by Donald Trump as a staunch conservative judge, not only voted (along with Roberts) with the liberal bloc to extend Title VII anti-discrimination protections to sexual orientation and gender identity, but wrote the majority opinion. As this chart shows, no matter where one begins, justices in general tend to become more liberal over time. 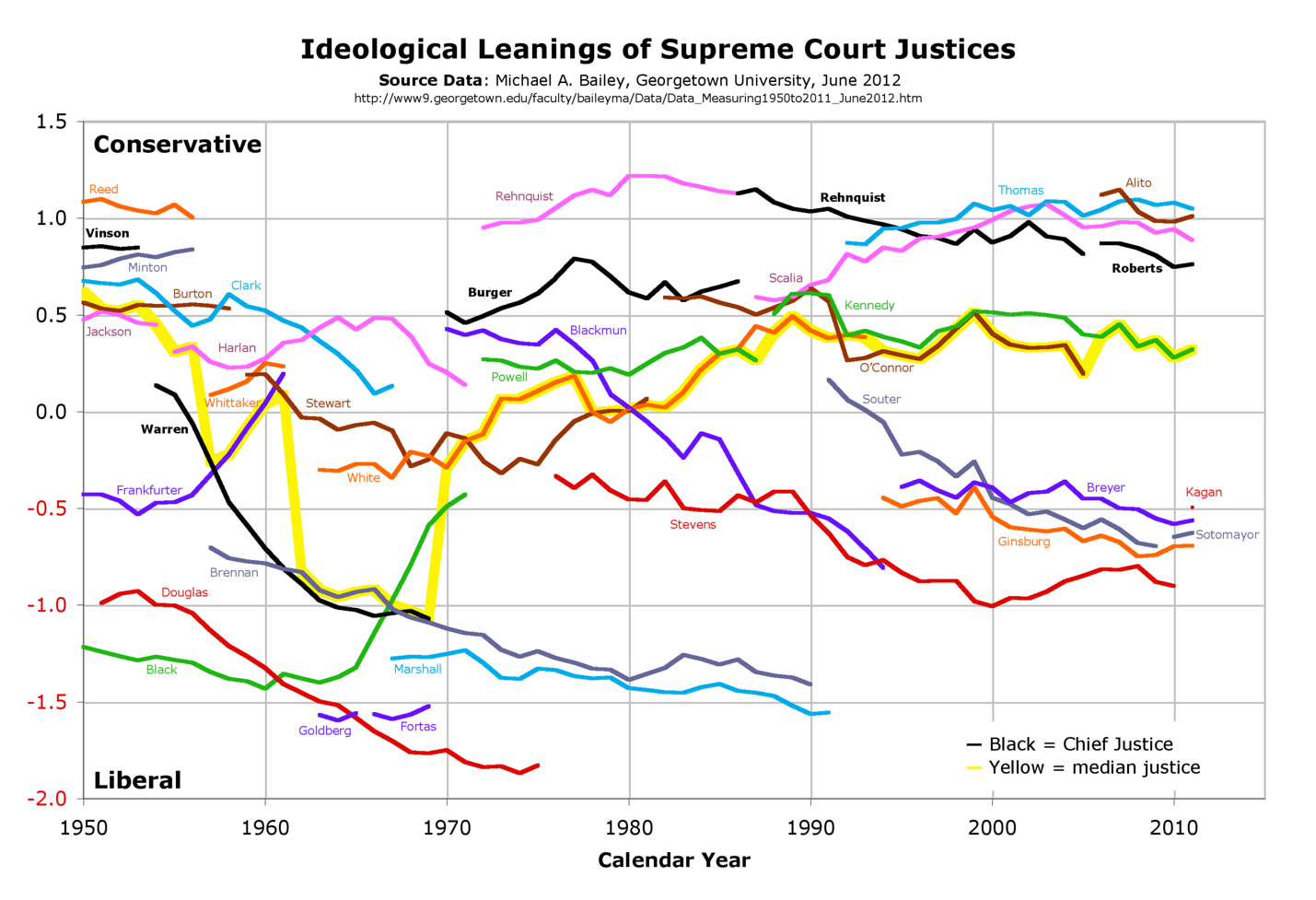 Meanwhile, liberal justices rarely waver in their support of the liberal outcomes of these cases. While there are various reasons why this might be the case, a likely explanation is that liberal justices already conform to the foundational liberalism that dominates America’s elite ruling class. As Adrian Vermeule has argued, these otherwise conservative justices are following the “unwritten constitution,” the constitution of our pervasive liberal order that prizes individual autonomy, economic deregulation, sexual expressivism, and porous national borders. These are the bedrock values of “gentry liberals,” the elite-educated urban professionals who dominate our educational, media, entertainment, bureaucratic, and cultural institutions. Vermeule observes that in judicial decisions where those values are contested, the least conservative justices “switch” in order to preserve this “unwritten constitution.” They are, in effect, upholding the deeper “unwritten constitution,” even when the written Constitution itself does not require or even support such decisions.

For this reason, we might be better served to inquire about Judge Barrett’s relationship to this class of “gentry liberals.” Certain facts about Judge Barrett’s biography appear particularly salient. The first is that Amy Coney grew up in Louisiana, among the most distinctive states in the union. The southern part of Louisiana, where she grew up, is the most (maybe only) Catholic part of the “Christ-haunted South.” To be a Southerner in America is to be in tension with America’s dominant culture—as writers such as the Southern agrarians and Wendell Berry have long noted. This tension is doubled for a Catholic Southerner. It’s no coincidence that southern Louisiana was the birthplace of the distinctive American Catholic novelists Walker Percy and John Kennedy Toole, both philosophic novelists who, in their unique ways, portrayed “the dislocation of man in the modern age.” Percy’s great novel, The Moviegoer, draws deeply from the experience of someone who is simultaneously living and observing one’s own life. A collection of his essays was fittingly entitled Signposts in a Strange Land.

Louisiana is unique in another respect—one not disconnected with its historic Catholicism—in that it is the state with the highest percentage of native-born residents, fully three-quarters. An article describing this data shows how deeply the state runs against the dominant American assumptions of how we should view place and origins, contrasting “mobility” with being “stuck.” The presumption in our unwritten liberal constitution is that mobility is the norm and default, the condition that those who seek to be successful, free, and autonomous exercise in contrast to those who are “stuck.” Louisianans are at once distinctly rooted (a more positive word than “stuck”), yet, for that very reason, “out of place” in America, set apart as people in a state that prizes loyalty and “sticking” amid a wider “strange land.”

Amy Coney was among those to leave Louisiana—though her parents remain there—but by way of Rhodes College, a small liberal arts college in Memphis, Tennessee. Rhodes College is an excellent school, but more regional than national, not likely to be on the top of the list of the nation’s most ambitious students in the way that Harvard and Princeton, or even Amherst and Williams, might be. At that time, and still in some respects today, Rhodes College was a traditional liberal arts college. It had a great books curriculum and was thick with traditions that dated back to its origins.

Upon graduation, Amy left the South for the Midwest and the University of Notre Dame Law School. The Law School at Notre Dame is a unique institution among highly-ranked law schools, replete with faculty dedicated to the university’s Catholic mission. It is a place where faithful students of all denominations are drawn not only to freely practice their religion in a supportive environment, but to engage in the study and practice of law informed by the teachings of natural law and the long tradition in which “faith seeks understanding.”  Thereafter, Amy finally “arrived” in Washington, D.C.—the epicenter of the American power elite—where she lived and worked for several years. But when it came time to settle, after marrying and starting her now-famous family, she and her husband moved to South Bend, Indiana, where Amy Coney Barrett began an illustrious career as a popular and accomplished professor in the law school.

South Bend is not only a quintessential “rust belt” city, but a place inescapably in the shadow of Notre Dame’s golden dome. The university and the area immediately surrounding campus is sometimes called “Catholic Disneyland,” a place where Catholic families feel distinctly “at home.” While the media emphasizes Judge Barrett’s “large family,” in South Bend, a large minivan full of siblings is not unusual. In our neighborhood alone, one can point to dozens of homes where at least four siblings, and often more, are growing up in homes on streets and back alleys that fill with children after school. As I write this, some of the Barrett children are gathered in roving bands with other families’ children, running around the neighborhood utterly oblivious to the presence of dark-tinted SUVs on every corner. A family of nine might be counter-cultural in a city like Washington, D.C.; in South Bend, it’s just a regular family.

If confirmed, Amy Coney Barrett would be the first justice in decades not to have received either her law school degree or her undergraduate degree from Harvard, Yale, Columbia, or Stanford. She would be the only current sitting justice not to have graduated from Harvard or Yale Law Schools. Instead, she will have been dominantly shaped by the schools and surroundings of “red America.” She will be the first justice to receive her law degree from a Catholic university. She has spent almost her entire life in the “flyover” places of America where “gentry liberalism” is not the dominant fashion. Rather, she has either been born into, or sought out, places where a different ethos reigns: family, home, place, tradition, community, and memory. While she might very well acclimate to the dominant “gentry liberal” ethos after spending the coming decades in Washington, D.C., there is hope her entire life story to date will make her resistant to that fate, more a moviegoer than a Zelig. These facts about Judge Amy Coney Barrett are among the most important to ponder—and, to my mind, celebrate—as we reflect on the likely trajectory of her time on the bench.

Patrick J. Deneen is David A. Potenziani Memorial Professor of Constitutional Studies at the University of Notre Dame.

First Things depends on its subscribers and supporters. Join the conversation and make a contribution today.